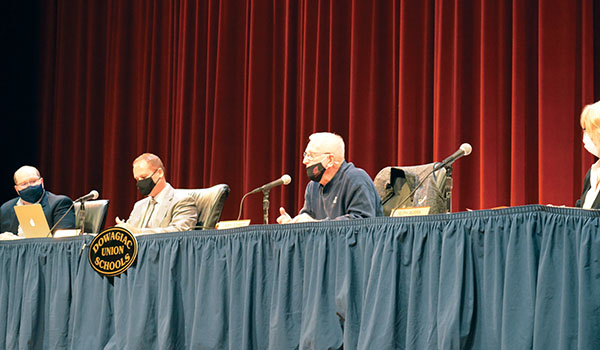 The district received an “Unmodified Opinion,” which is the highest auditor opinion. Maner Costerisan reviewed the financial statements pertaining to all funds, general fund and non-major funds. According to the audit, the district did not have any issues of non-compliance with grants or regulations.

“We were just building a budget in June with the best information we have,” said DUS Director of Finance Stacy Ritchie. “Our budget had to be approved before June 30 but we didn’t even have all of the information regarding state aid until the end of August. We just did the best we could and tried to be as conservative as possible.”

The board passed a motion to approve the 2019-20 audit from Maner Consterisan.

“The staff was available,” said Tyler Baker, of Maner Consterisan. “They communicated early and often with us, and I think that’s why this audit ended up turning out so effective, especially during a time of uncertainty.”

According to Baker, the district’s general fund budget was estimated to experience a decrease of $1 million, but came out with a net positive of $437,000. The change in fund balance was a 6.4 percent variance with the final budget total expenditures.

The increase is attributed in part to the district not spending as much with schools shutting down in March. The district was also bracing for a possible $650 to $750 cut in per pupil foundation allowance and saved money when the actual cut was announced to be $175.

“We went with a conservative final budget due to not knowing how much the state was going to end up cutting from the school in August,” Ritchie said. “With expenditures, we weren’t running buses with gas. The buses weren’t breaking down, and the buildings were closed, so we were able to save there.”

The $437,000 increase gives the district a fund balance of $4.6 million. The Michigan Department of Education utilizes an 11-month payment schedule of school aid payments. The district’s fund balance is used to cover its financial obligations for the 12th month.

“The healthy fund balance allows us to not have to borrow against the state aide,” Ritchie said. “Since we didn’t have to do that, we did not have to pay state interest and fees. It gives us the cash flow needed to make payrolls.”

The district also had a bond refunding in the fiscal year, which is the concept of paying off higher-cost bonds with debt that has a lower net cost to the issuer of the bonds. Baker said that the bond refunding will save the district approximately $211,000 and will decrease its total debt service requirement by $125,000.

“I really appreciate the work of Stacy and Superintendent Jonathan Whan working together in very difficult times,” said DUS trustee Ronald Jones. “Things were changing every day as far as finances. To perform this well speaks well to their efforts.”