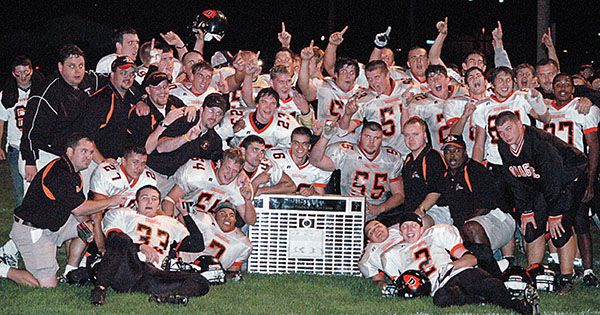 The 2005 Dowagiac football team celebrated winning the Black and Blue Rivalry plaque when the series ended. Dowagiac and Niles will renew its rivalry on Friday night. (Leader file photo)

Top 10 games of the Niles-Dowagiac series

NILES — The Dowagiac-Niles series concluded in 2005 with the 102nd installment of one of the longest continuous rivalries in the state of Michigan.

The Chieftains traveled to Niles to conclude the series, which began in 1896. Niles holds a 49-47-5 lead all-time.

Here are the top 10 games of all-time:

The Vikings were 3-5 and hoping to repeat past histories. Niles once again came away with the big 13-9 upset.

In the second overtime, an unlikely hero emerged for the underdog, but proud Dowagiac team. The Chieftains’ capable placekicker, Hillary Bisnett calmly converted a 24-yard field goal for a heart-pounding 31-28 victory over a stunned group of Niles Vikings and their fans.

It was a most appropriate ending for the 100th game between these two great rivals.

With 44 seconds remaining in the rain-soaked game, the Chieftains had just scored and closed the Viking’s gap, 14-13. Wilson, Dowagiac’s kicker, lined up for the kick, but instead, he took a direct snap and ran around the left end for a 2-point try. At the four-yard line, Wilson was tackled with an ensuing fumble. Game over, Niles wins. Wrong. The officials ruled that Wilson had crossed the goal line before fumbling and Dowagiac won 15-14.

Many of Niles fans forgot what a truly great athlete Wilson was because of this play and during the basketball season. In the Vikings-Chieftains’ hoops game that winter, Wilson scored a basket for the Vikings and told them, “there’s your two points back.”

KALAMAZOO — The Brandywine tennis team was eliminated from the Division 4 state tournament in the quarterfinals on Thursday. The... read more