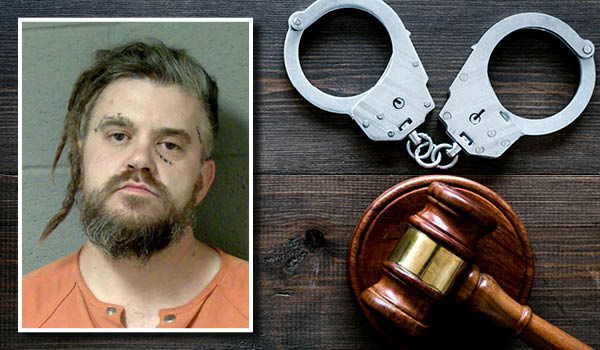 Prior to the incident, Carlton, 41, of Kalamazoo, had been convicted of three prior offenses, including an assault by strangulation in 2014.

At the plea, Carlton acknowledged going armed on the night of the murder with the Luger to 700 Louise Ave. in Dowagiac in the accompaniment of co-defendant Jay Penar. Carlton indicated that he and Penar then entered Collins’ home with masks on. Upon entry, the homeowner, Collins, resisted and was immediately shot by Carlton.

Carlton told the court that after shooting Collins, items were taken from the victim’s Dowagiac home and transported by him and Penar to Kalamazoo where the bulk of the items were unloaded at a drug house.

All other charges in case, including conspiracy to commit robbery, armed robbery and unlawful firearm possession, were dismissed as part of the plea agreement, along with a separate file charging Carlton with possession of a weapon in the Cass County Jail and resisting law enforcement officers on March 8.

In particular, Fitz noted that their timely actions resulted in the prompt detection of two masked suspects who might have otherwise avoided detection for many days, weeks or even months.

Michael Collins was 40 years old at the time of his death. He is survived by two adult sons.

Sentencing on Carlton’s second degree murder conviction is set in front of Judge Mark Herman of the 43rd Circuit Court at 8:30 a.m. on Dec. 18.

Carlton’s co-defendant Penar, 39, of White Pigeon, is set for a pretrial conference next week. Penar faces 11 felony charges including open murder and armed robbery in connection with Collins’ death.