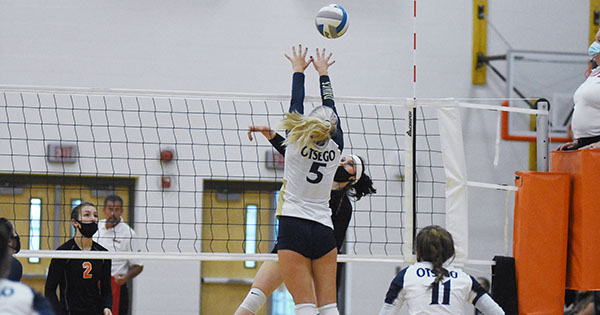 DOWAGIAC — The Dowagiac volleyball team went 3-0 to capture the Coloma Quad on Saturday.

The Chieftains defeated Lawton, the host Comets and Galesburg-Augusta.

On Thursday, Edwardsburg, the defending co-Wolverine Conference champions, locked up a share of the 2020 title with a win over Allegan. The Eddies can clinch the outright championship on Thursday with a win over Paw Paw.

The Niles volleyball team went 1-2 at the Hamilton Quad against some tough competition.

“It was good to get a few wins under our belts as we head into the last phase of the season,” said Dowagiac coach Tony Hooley. “Most of our schedule had been conference matches, and we play in a very competitive league, so to see some other area teams was a nice change.”

Megan Davis had 20 kills for the Chieftains, who also got 19 from Caleigh Wimberley. Allie Conner led the team in digs with 34, while Wimberley had 32, Davis 24 and Jessie Hulett 22.

After missing more than a month as she recovered from injuries sustained in a car accident, Brooklyn Broadway returned to the Eddies lineup to lead the team with five digs. Macey Laubach had four kills. Liz Pederson had five blocks.

“We definitely learned some lessons tonight, which is exactly why we traveled to Hamilton to play in this intense, loaded quad,” said Niles coach Jenny Nate. “Coming off of our big win against Buchanan last night, I always want my girls to have to stay focused and turn around and know that we have to get better and play bigger day after day even after a big win. There is always going to be someone out there better or bigger or stronger, and I want us to have to face those teams every opportunity we can so that we continue to strive for excellence and improvement, avoid complacency or being satisfied with where we are, and to know that we can play with and beat any team in the state. That is our ultimate goal.”

Jullian Bruckner, Marika Ruppart and Laura Golubski were strong once again at the net for the Vikings as they combined for 48 kills and 10 blocks.

Beckman also had 46 assists and Johnson 13.