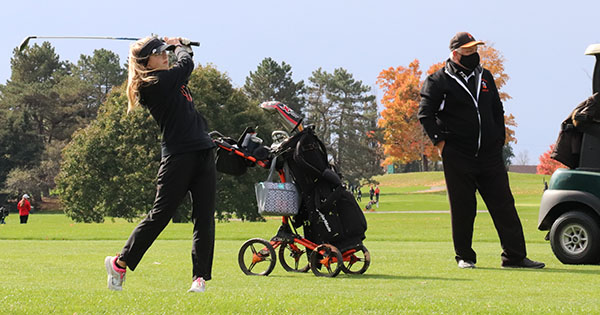 Due to COVID-19 restrictions, the state tournament, at Forest Akers East on the campus of Michigan State University, was a one-day event of 18 holes instead of the regular 36-hole format hosted over two days.

Ruff was the second straight Dowagiac player to compete in the state finals. Last year, Greta Whitaker became the first Chieftain to play in the girls golf state finals. Whitaker, who now plays golf at Bethel University in Mishawaka, Indiana, shot a two-day total of 189.

Ruff got off to a slow start, but regrouped to finish 57th out of 108 golfers.

“Calley did not get off to a great start. I think she would admit she felt the nerves a bit,” said Dowagiac coach Bob Turner. “She started with a double bogey, double bogey and triple bogey. But she kept grinding and hit some really nice shots in recovering to shoot 48 on the front and 46 on the back. She finished par, par, bogey to finish with a 94.”

Ruff is in her third season of varsity golf at Dowagiac. She helped the Chieftains to a runner-up finish in the Wolverine Conference and a West Division championship last year.

“I was really proud of the way she turned things around and strung together some good holes after her start,” Turner said. “I think she really enjoyed the day. She loves to compete, and there is no better way to compete than against the best.”

Marian won the team championship with a score of 312. Lutheran North was second with a 327 and Grand Rapids South Christian third with a 330. Allegan, out of the Wolverine Conference, finished 18th with a 405.

Shannon Kennedy, of Marian, shared medalist honors with Ryann Breslin, of Grand Rapids Christian, as they both finished with a 2-under par 70. Ella Smith, of Frankenmuth, was the top golfer not on a qualifying team. She shot a 76. Renae Jaeger, of Plainwell, also out of the Wolverine Conference, finished three shots ahead of Ruff in 48th place.

CALVIN TOWNSHIP — A woman who was shot in a domestic violence incident on in Calvin Township Sunday morning is... read more