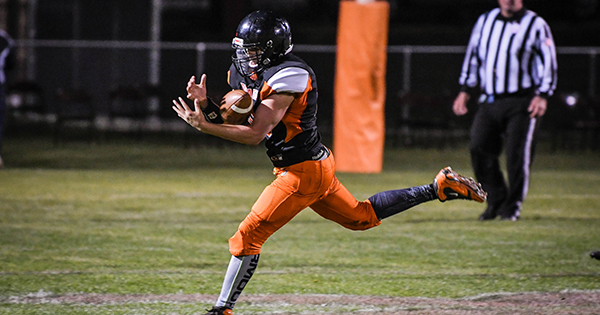 But the Bulldogs had other ideas.

Vicksburg shut down Dowagiac to the tune of a 33-0 victory at Chris Taylor Alumni Field.

The Chieftains were active on defense in the first quarter, forcing an interception and recovering a fumble, but were unable to take advantage of the field position on offense.

“We started early,” said Dowagiac coach Randy Brooks. “We forced a couple of turnovers and then [Conklin] took over. He got out of the pocket a couple of times and had a couple of big runs.”

In the fourth quarter, a Dowagiac first down was taken away following a chop block penalty. The Bulldogs set up at the 50-yard line and went to work on the drive, capped by a 13-yard Conklin touchdown pass to go up 33-0.

The Chieftains were unable to find production on offense against a stout Vicksburg run defense. Dowagiac is averaging 10 points per game, its worst output through five games since averaging 10.8 points in 2002.

“Offensively, we didn’t get anything going in the first half. We put our defense in a tough spot, and they kept making plays. I think they kind of wore us down. We’ve struggled on offense all year. It’s the same story every night. Our defense got tired.”

Dowagiac was held to 128 yards rushing, The Chieftains still have not completed a pass in 2020. Malakai Haines finished with 76 yards on 14 carries.

Vicksburg is hoping to get some consistency. The Bulldogs have outscored opponents 117-0 in its three wins while getting outscored 115-34 in two losses.

“We’re getting better every week,” Marchese said. “It’s been a crazy season. We started practicing with helmets, then we stopped and we started back up again. It’s taking longer to get into a rhythm. You can see that every day and every game but little by little we’re getting better.”

The Chieftains (2-3) aim to shake off the loss as it prepares to face a historical rival in Niles. The rivalry is one of the oldest in the state, with 102 total games played from 1896 to 2005 when the Chieftains came away with a 42-27 victory.

“We’ll regroup,” said Brooks. “It’s Niles. It’s fun to be back at it. We’re just blessed to be able to play football.”

NILES — For the first time since 1981, Niles and Buchanan met on the gridiron Friday night. The Bucks, despite... read more