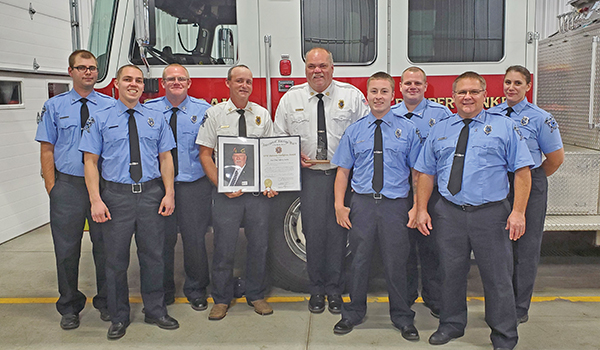 CASSOPOLIS — A statewide organization has recognized one Cass County firefighter for his years of service to both the community and the firefighting profession.

Central Cass Fire Chief Jeff Locke was honored as the Michigan Veterans of Foreign Wars’ Firefighter of the Year during a Thursday evening celebration. According to former VFW post commander Chris Bergen, Locke was nominated by Cassopolis firefighters and members of the fire board.

“As Jeff will undoubtedly tell you, this award is really for all of you at the Central Cass Fire Department, but we also know there has to be a leader to keep things going, organized and accomplished,” Bergen said. “That person is Chief Jeff Locke.”

As both a VFW member and a firefighter in neighboring Penn Township, Bergen said he had seen first-hand how Locke serves the community regularly.

“I get to see the dedication and the effort he puts in with his department to help protect his community,” he said. “That really made the choice easy.”

Jessica Wright, Michigan VFW safety director, was present at the meeting to present Locke with the award.

“[Locke] has shown an extraordinary commitment, keeping in the core values and the tradition of the firefighter profession,” she said. “Fire Chief Jeffrey Locke is truly a role model for all firefighters.”

When it was his turn to take over the podium, Locke accepted his award with a smile, though he said he never expected to receive such an award. He then thanked the VFW, Central Cass firefighters and Penn Township firefighters for all they do for the community.

“This is certainly an honor,” he said. “It’s just outstanding.”

Locke joined the Central Cass Fire Department in 1986 and has been chief since 2011. However, his career in firefighting began long before that. At age 16, he would join his father, who was stationed at the Penn Township Fire Department, on fire runs. As a teen, he would help in any way he could, even if it was just helping drag the firehose where it was needed. By the time he was old enough to join a fire department as a full-fledged volunteer, Locke knew he wanted to follow in his father’s footsteps.

“I just think everyone ought to do something for their community, volunteer their time somewhere,” he said. “[Firefighting] was an easy way for me to get involved, and once you are involved in it, it is hard to give it up.”

Following Thursday’s ceremony, Locke said he hoped he could inspire more area residents to volunteer with the Central Cass Fire Department and give back to their community.

“Volunteers are always needed in any department,” he said. “Whether it is Cass, Penn or anywhere in the county or state, fill out an application.”

CASSOPOLIS — Cass County continues to see an increase in domestic calls as residents are encouraged to spend more time at home.... read more