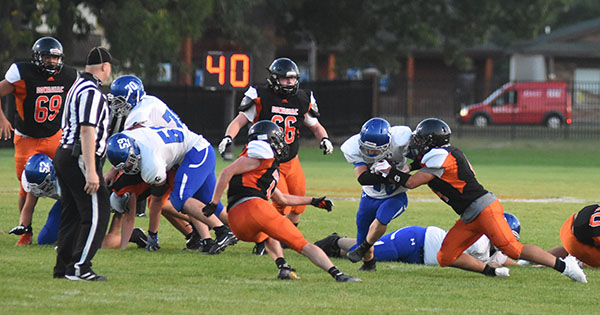 The Wolverine Conference continues to struggle with scheduling due to COVID-19. Plainwell, seen here against Dowagiac, has canceled its final two games of the regular season. (Leader file photo)

DOWAGIAC — Teams in the Wolverine Conference continue to have to shuffle schedules due to cancelations and postponements due to outbreaks of COVID-19 at some schools.

Undefeated Plainwell, which defeated Dowagiac 44-14 in Week 2, has had to cancel its final two games of the regular season due to an outbreak in the program. The Trojans previously had to cancel their Oct. 2 game, one week after playing Dowagiac, against Edwardsburg.

That means Plainwell, like other schools throughout the state of Michigan, will finish the 2020 regular season with less than four games. During a regular high school football season, the Michigan High School Athletic Association requires a school play a minimum of four games to attempt to qualify for the state playoffs.

Earlier this fall, MHSAA Executive Director Mark Uyl said that schools could petition the state if they finish the regular season with fewer than four games. Those petitions will be considered on a case-by-case basis, according to Uyl.

Plainwell is not the only Wolverine Conference team to struggle with their schedules.

Edwardsburg has had to change multiple games. The Eddies traveled to Jonesville when Detroit Country Day had to cancel their game on Sept. 25. Edwardsburg took a bye week on Oct. 2 when Plainwell canceled their game. The Eddies are traveling to Bay City Western on Saturday to replace its game with Wolverine Conference foe Allegan, which canceled the remainder of its season after a 44-24 loss to Brandywine last week, due to low numbers in the program.

Three Rivers also had to replace this week’s opponent. The Wildcats will face undefeated Ithaca, which lost its game against Valley Lutheran. Three Rivers was scheduled to play Plainwell Friday night.
With the playoffs two weeks away, cancelations could mean the end of a team’s season without even stepping foot on the field. The playoff selection show on Fox Sports Detroit is scheduled for Oct. 25.