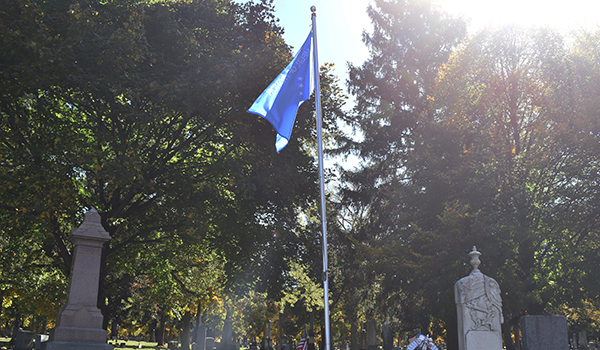 NILES — A new, blue flag flies over the gravesite of Joseph A. Nolan in Silverbrook Cemetery. The flag is emblematic of his bravery and acts of valor. Nolan, a Congressional Medal of Honor recipient, will continue to be honored as fresh attention will be paid to his resting place.

The American Legion Post 26 has taken it upon itself to look after Nolan’s final resting place. As Nolan was a Congressional Medal of Honor recipient from the Spanish-American War, the legion members will be helping to keep the site clear and the flag flying overhead in good condition.

The post’s members have been busy, planning meetings and looking for ways to host benefits for the community. A flag over Nolan’s gravesite, visible from South 11th Street, is just a start for the post.

After a storm ripped through Niles at the end of August, the flag flying above Nolan’s resting place was tattered.

“After the old one was taken down, we talked about getting a new one,” said American Legion Post 26 Commander Odie Stewart.

That is when Niles public works Director Joe Ray dropped off two flags to the Silverbrook Cemetery Manager Neal Mikel’s office. The American Legion Post 26 members accepted the flags, and already had another on the way. The flags will be swapped out for the winter, and honors will be given on Memorial Day.

This past Memorial Day is when the idea first came to Stewart to take on the responsibility of maintaining the honor awarded to Nolan.

“We had a memorial for Memorial Day, and we paid homage to Nolan,” Stewart said. “It was at that time that I realized we needed to do something.”

He said the Warrior’s Oath motorcycle club was with them for the event. During COVID-19 precautions and restrictions, most of the traditional Memorial Day events had to be canceled or postponed. The American Legion posts in Niles and Buchanan teamed up have small Memorial Day events with their members.

Warrior’s Oath is a local charity group made up of all branch veterans, with members from American Legion posts. According to member Julie Sisk, the group is a 501c3 focusing on help veterans in the community.

Sisk said between the American Legion and Warrior’s Oath, the groups have participated in honoring both those on active duty and veterans.

She said Warrior’s Oath put together donations of $130 toward purchasing a new Congressional Medal of Honor flag for Nolan’s gravesite.

Stewart said he has known of Nolan’s bravery for quite some time. From what Stewart knows of Nolan, he was born on Jan. 20, 1857, in South Bend. He passed in Niles on Aug. 19, 1921. Nolan served in the U.S. Army as a volunteer before, or during, the Philippine/American conflict, between February 1899 and July 1902.

“During the conflict, Nolan, apparently a stone-cold patriot, navigated through and behind enemy forces to distribute needed items among captures prisoners,” Stewart said. “Let us be reminded of one of the requirements needed to be a ‘warrior.’ Such a requirement is to remain ‘resilience.’ That is to owning and keeping our sanity and humanity, while facing inhumanity.”

Stewart said that 86 U.S. soldiers received the honor of a Congressional Medal of Honor during that time.

“Joseph A. Nolan received his Medal of Honor for being all he could be: a human being,” Stewart said.

Stewart was grateful for the city’s involvement, Warrior’s Oath and to his First Vice Commander Darron Lewark and finance officer Bob Ahrens from the American Legion Post 26 for their contributions to this effort.

The American Legion Post 26 meets the second Tuesday of each month at 7 p.m. at the Martin’s Side Door Deli, at 720 S. 11th St. Stewart said any members having issues with membership cards, or anyone who would like to contribute to the post’s efforts is welcome to attend a meeting, Stewart said.

SOUTHWEST MICHIGAN — A crown resting on her head and a sash across her body, secured with a sparkly broach... read more