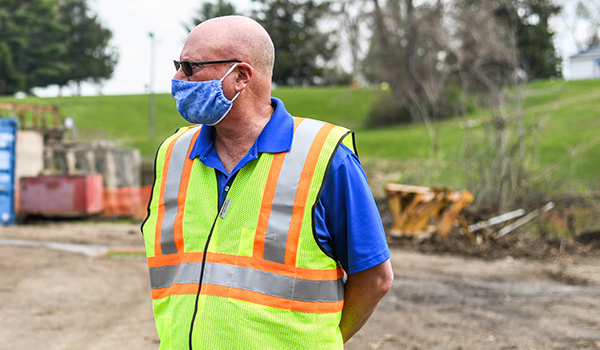 Removing the dam will restore it to a free-flowing river, something it has not been in nearly 200 years, between the Pucker Street Dam and the Eli Ford Dam, thought to be built in 1828.

At the Sept. 28 Niles City Council meeting, hosted virtually, the council entered a closed session to discuss a land purchase related to the project. After the closed session, the council returned and voted on two purchases without public discussion.

At the time, residents were left seeking clues in council member Jessica Nelson’s notes, which revealed the two parcels were “near” or “adjacent” to the Pucker Street Dam. Council member John DiCostanzo expressed his thoughts that the purchases were an opportunity for the city to save money, and potentially use the parcels as wellfields.

As both sales finally closed on Monday, Niles Utilities Manager Jeff Dunlap discussed what the purchases meant for the Pucker Street Dam project and for the city of Niles.

“For almost 200 years, that river has been backed up and choked with sediment,” Dunlap said. “We’re going to take out a quarter of it, and the rest will either stay in place or naturally evacuate or move around.”

Removing the sediment, however, meant needing a place to put it.

“We are able to move spoils from the river and redistribute them throughout the acreage in various portions and plan it,” Dunlap said. “It’ll be farmland and stay farmland. It’s a win-win for everyone. The cost is an offset for us. It doesn’t cost us anything more to gain a local asset owned by the community, versus to create a wetland somewhere else in another part of the state.”

The parcels of land that went up for sale were also nearby the project, which was important.

“River frontage, contiguous to our park, was important,” Dunlap said. “It had to be adjacent to our park. We cannot put spoils [sediment] in dump trucks to haul across a public road. It’s too expensive.”

When moving the sediment, the city would have to purchase state wetlands credits to offset the alterations to an environment, as well. Purchasing the land helped to avoid the need to purchase offsets.

“This parcel came up for sale, and it sat there for a couple of weeks,” Dunlap said. “[The price] was not driven up by the municipality. The opportunity presented itself, and it’s a win-win for the ecology, the project and the community.”

Losensky Park will be raised in elevation by some of the sediment, as well.

Another perk to the city owning the land will be a potential new site for a city well.

“We’ve been looking for a new city water well site for years,” Dunlap said. “It also has the potential to be that. It’s close to our water infrastructure. It would be very easy to sink a municipal well to connect to our existing infrastructure.”

According to Dunlap, the dollar amount might seem huge to residents, but the Pucker Street Dam project is no small undertaking.

“It’s arguably the biggest project this community has seen in decades, at close to $12 million,” Dunlap said.

NILES — The Niles City Council met in person Monday evening for the first time since it went virtual due... read more