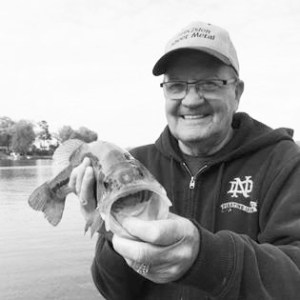 Jim graduated from Goshen High School where he was an avid participant in basketball and track. He continued his love of sports as an adult where he played basketball, was on bowling leagues, golfed and had a great love for fishing. He was also a die-hard Notre Dame fan.  Jim worked in the sheet metal industry most of his life and was part owner with Precision Sheet Metal in Edwardsburg.

Jim was a force of nature, determined to provide for his family and give them the life he felt they deserved. His family meant more to him than anything else in the world, something he often mentioned. He was a true friend to many and could never resist telling a few jokes. He was a longtime resident of Barron Lake and loved having summer cookouts with family and friends.

He is survived by his two daughters, Robynne Wagner and Susan (Michael) Miller with his previous spouse Katherine Wright, his girlfriend of 30 years, Patricia Sobchak; and his two sisters, Diane Cybulski and Pat Shanholt. Jim also was the grandfather of Cory (Rachael) Wagner, Nic Johnson, Daniel Miller, Codey Miller and Scot (Abigail) Miller and great grandfather to Xander, Isabella and Paisley and many nieces and nephews.

A man is a success  who has lived well, laughed often and loved much, who has gained the respect of men and the love of children, who has filled his niche and accomplished his task, who leave the world better than he found it.