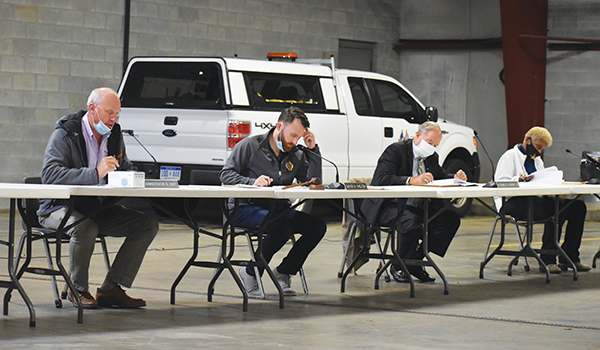 NILES — The Niles City Council met in person Monday evening for the first time since it went virtual due to COVID-19 after March 23.

The council met in the Niles Utilities Service Center, giving council members, city officials and audience members room to space out. Each council member sat at their own folding table, fanned out before the audience chairs, which were also spaced about 6 feet apart. Masks were required upon entry to the facility.

Despite meeting in person, the meeting was still accessible to at-home viewers on Zoom.

“This format change is due to recent Michigan Supreme Court rulings that require this meeting to be held in person,” said James Stump, information technology team member.

Only city council member Jessica Nelson was missing from the lineup at the meeting.

Repairs to polymer play structures in Niles city parks were approved by the city council on Monday evening, in the amount of $4,108.

Council member Gretchen Bertschy inquired about the repairs, citing $1,500 being used in one of the city’s smaller parks, Clavenger Park.

“We had a pretty significant failure of a slide in Riverfront Park,” said City Administrator Ric Huff. “We started looking for ways to either replace the slide or have it repaired.”

Huff said city officials became aware of the company, PolyMenders. The company travels the U.S. in a mobile home and schedules stops for repairs.

“Since [PolyMenders] was traveling and wouldn’t be available again until next year, we went around and did an inventory of all the plastic slides and structures we have in the city,” Huff said. “All the [structures] identified as cracked, damaged or had holes in them, is how this list was created.”

“I don’t know about removal, but it’s significantly less than replacement,” Huff said.

Another purchase that drew discussion from council members was that of a 2015 Chrysler 200s from a private citizen for the Niles Police Department to use. The vehicle, to be purchased at a cost of $15,500, was brought up by council member Dan VandenHeede as seeming high in price. The miles for the vehicle are low.

“In order to remain compliant with state mandate and in order to keep our employees knowledgeable and up to date on the most recent best practices, the police department often sends employees to various training throughout Michigan and sometimes other states,” Millin said. “When sending an employee to training, there are two options for transportation, the employee can use their own vehicle, and the city has to reimburse them for mileage, or the city (i.e. the police department) can provide them with a vehicle.”

Huff also stated that there are police department employees who are not certified police officers, and when needing to be at training or travel for work, they should not be driving a police-marked car. He said the car would be marked as a police department vehicle, but would also be made available to other city employees as needed.

The council ultimately approved the purchase.

Another revelation came to light on the city’s land purchase during the meeting. As a part of the city’s 30-acre purchase approved at the last city council meeting, a residential dwelling was included. The parcel was purchased for $598,000, with the dwelling included.

The address of 440 Pucker St., from Duane D. and Judy Kaye Paturalski Trust, offered to sell furnishings and equipment to the city for $13,999.

The Fiscal Year 2021 budget had not made room for such a purchase, but the recommendation from Jeff Dunlap, utilities manager, was to use revenue in the electric division for the expenditure.

“Although no clear, identified use of the dwelling has been formulated, keeping it furnished is advantageous,” Dunlap said in his recommendation.

According to Huff, the owners of the property have relocated to another city in Michigan. The home is still fully furnished, including plates, dishes, draperies, kitchen and dining room tables.

“House is fully furnished top to bottom,” Huff said. “I believe you have some information that we intend to use the house for some lodging.”

In other news, the city council also approved the purchase of a new spray patcher, at the cost of $62,000.