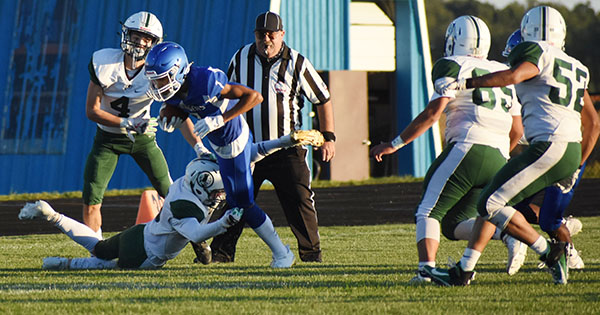 The Cassopolis football team was held to 83 yards of total offense and turned the ball over six times against White Pigeon Friday night. (Leader file photo)

Turnovers lead to loss for Rangers

The Chiefs’ win was the first against Cassopolis since 1984.

Neither team could find any offensive rhythm in the first half. A 5-yard Anthony Rubio run and a 2-point conversion run by Daniel Jackson gave White Pigeon an 8-0 lead, which it took to the locker room at halftime.

Back-to-back touchdowns in the third quarter completed the scoring.

Collin Mayville scored just 17 seconds into the second half on a 4-yard run before Dylan Carper, who finished with three interceptions on the night, picked off the Rangers’ pass on the ensuing possession and returned it for a touchdown to make it 20-0.

Rubio and Dominick Pant also had interceptions in the contest.

The Chiefs finished with 177 yards of total offense compared to just 83 for Cassopolis, which travels to Mendon Friday night.

The Rangers are now 2-2 on the season after dropping back-to-back games.

NILES — For one half, visiting Allegan was able to hang with Brandywine Friday night. But the Tigers, who were... read more