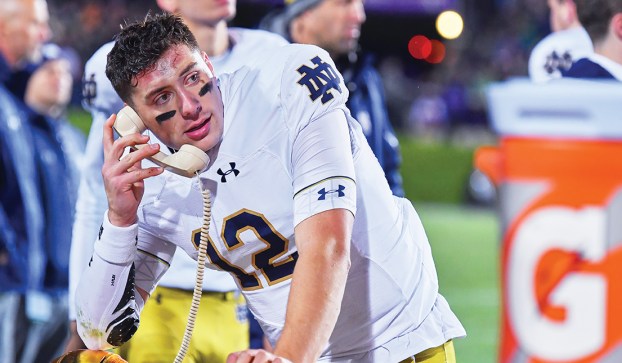 NOTRE DAME — Saturday night lights lit up Notre Dame Stadium for the first time this fall as the No. 5 Fighting Irish ran all over a struggling Florida State Seminole team by a 42-26 score.

For the Irish (3-0), they return to the field following an unscheduled bye week in which the Wake Forest game was postponed and then rescheduled for Dec. 12 due to COVID-19.

“The 21-day break was not a fun thing,” said Notre Dame head coach Brian Kelly. “It felt like a season-opening game on the sidelines and we had to get used to it. I felt our conditioning was a little light, especially towards the end of the game.”

Notre Dame had some rust to shake off following the extra time off as Kyren Williams fumbled on the first offensive possession, which Florida State capitalized and led early 3-0.

“He bounced back great,” Kelly said about Williams’ fumble. “He really showed the type of athlete he is.”

The following two drives, the Fighting Irish offensive line continued to get penetration in the trenches with allowed Williams to have rushes of 65 and 46 yards. He would have 19 rushes for 185 yards and 2 touchdowns for the contest. The Fighting Irish would finish with 353 yards on the ground.

Notre Dame senior captain quarterback Ian Book had a couple of touchdown passes through the air as well in the first half.  The second touchdown allowed Book to pass former quarterback Jimmy Clausen on the all-time passing touchdown list with 60 in his career. Current Notre Dame Offensive Coordinator Tommy Rees is second on that list with 61.

Leading 35-20 after halftime, the Fighting Irish continued to insert their dominance on the line as Book would add another rushing score in the third quarter. He finished with 58 rushing yards.

Backup freshman running back Chris Tyree had himself a night as well, carrying the ball 11 times for 103 yards, and a touchdown.

“These kids have some great blockers in front of them,” Kelly said about the success of Tyree and Williams on the field.  “They are also making the right decision on the field despite how young they are.”

Notre Dame’s running game helped convert 26 first downs compared to Florida State’s 18 and only face third down seven times with an average of 8.4 yards per rush.

“The running game is our bread and butter,” Kelly said. “We are continuing to work at it and get better.”

Notre Dame will look to stay unbeaten as they host Louisville (1-3) Saturday afternoon.

Florida State (1-3) will host No. 8 North Carolina this weekend as they look to get their first win over an FBS team in the 2020 season. Their lone win is against FCS Jacksonville State.