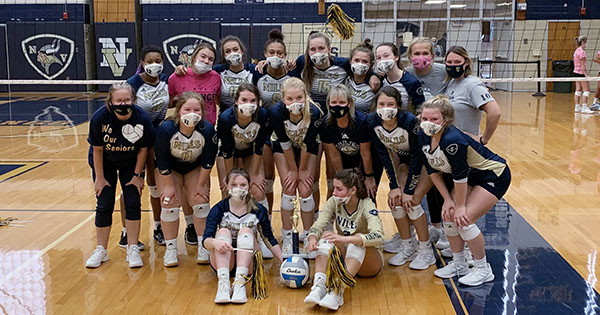 The Niles volleyball team went 3-0 to win its own quad on Saturday. (Leader photo/SCOTT NOVAK)

NILES — The keys to success for the Niles volleyball this season has been energy, enthusiasm and hard work.

The Vikings put all three of those elements on display in sweeping St. Joseph, Edwardsburg and Three Rivers to win its quad tournament on Saturday.

“Each week this team just keeps getting better,” said Niles coach Jenny Nate. “In all of my years of playing and coaching, I have never seen a team and bench play with this much energy. They literally rocked the gym today. Each one of our players feeds off of the others, and when we get rolling, start to make big plays, and the energy is there, we win big. Our goal coming into today was to maintain that energy in all three matches to sweep the quad.

“I always tell them to step on the court prepared and expecting to win. Our wins can be contributed to energy, confidence, leadership, and the way they treat each other. When we start winning runs, this team is electric, and good things happen. They are so much fun to coach and watch. They truly inspire me as a coach, and they are hungry to improve every day.”

Jillian Bruckner, Marika Ruppart and Amara Palmer continue their dominant net play. The trio combined for 61 kills, led by Bruckner’s 24, and 25 blocks, led by Palmer’s 10. Defensively, Cadence Knight had a big day with 37 digs. Emma Beckman had 51 assists for the Vikings.

Niles will be back in the gym on Monday, getting prepared for its final BCS Athletic Conference match at Buchanan on Wednesday. The Vikings, who will move to the Wolverine Conference next season, are undefeated in conference play, while the Bucks have just one loss.

Turnovers lead to loss for Rangers