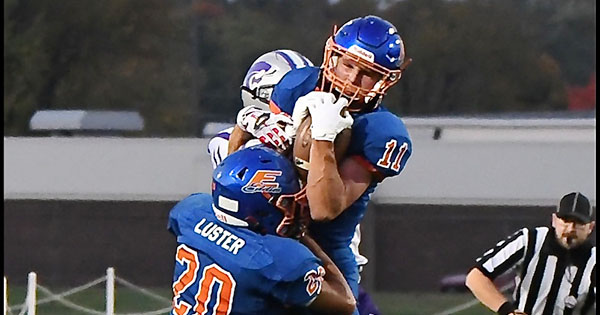 EDWARDSBURG — Homecoming may have looked and felt different for fans attending Friday’s game between Edwardsburg and Three Rivers.

However, what was not different was the end result: An Eddies’ victory.

The Eddies amassed a 51-0 halftime lead and went on to win 64-7 in front of an expanded crowd of fans.

“It was just a beautiful night for football,” said Edwardsburg coach Kevin Bartz. “We did a lot of good things on the football field offensively and defensively. Our special teams made plays. It was a good night for Edwardsburg football.”

Logan McColley was active early and often for the Eddies. The junior had a hand in each of Edwardsburg’s first three touchdowns: A 40-yard touchdown catch from quarterback Jacob Pegura and 5- and 11-yard touchdown runs. McColley led the defense with four solo tackles and an interception.

“Logan is a threat anywhere,” Bartz said. “He’s our deep man on kickoffs, he’s our safety and we put him at fullback. He’s one of those multi-purpose players because he’s so athletic. He makes plays on both sides of the ball. He made plays tonight, and he’s pretty typical.”

“My team was helping me out excuse the plays,” McColley said. “We really just came together. I practiced all week long and executed what we needed to do.”

The Eddies outgained the Wildcats 415-187 in rushing yards and averaged 10.6 yards per rush. Jaylynn Luster finished with four carries for 55 yards and one touchdown while Jackson Hoover led all players in rush yards, with 92 on five carries. Drew Bidwell tallied 58 yards on four carries and Brett Allen, Noah Houseworth and Nathan Cebra added touchdown runs of their own.

Cebra also added a 95-yard interception return for a touchdown, which Bartz believes could be a school record.

Eddies quarterback Jacob Pagura completed 1 of 2 passing for 40 yards and added 45 yards on the ground.

With a win in hand, Edwardsburg will face off against Bay City Western at 1 p.m. Saturday in Bay City. The Eddies were originally scheduled to face Allegan next week, but the football program elected to end its season following Friday night’s 44-24 loss to Brandywine, citing low numbers.

The two teams have never faced each other. With an enrollment of 1,141, according to the MHSAA, Bay City Western will be one of the biggest schools the Edwardsburg football program has ever faced.

“We’re headed into some uncharted territory,” Bartz said. “We’re not very familiar with the team. It will be a long bus trip but at this point in time, we’re just trying to play anybody that’ll play with the COVID stuff going on and teams dropping. We didn’t want to wait ’til next week. We’d like to start preparing for an opponent right now. They were open, we were open and so we figured we’d go ahead and make the trip. That way we can start getting ready for them tomorrow.”

NILES — Brandywine and Edwardsburg both picked up wins on Friday night, while host Niles captured its own quad volleyball... read more