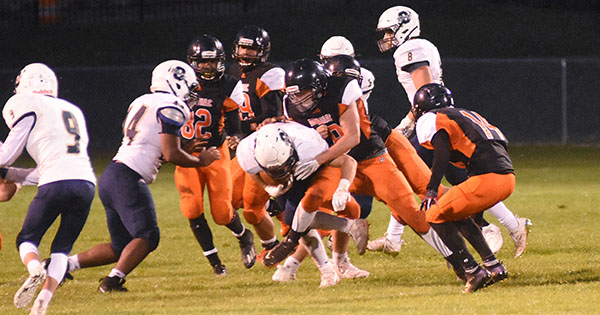 STURGIS — For the second straight week, the Dowagiac football team played solid defense and did just enough on offense to earn a victory.

After winning its first game of the 2020 season over Otsego last week, the Chieftains headed to Sturgis to face a Trojan program that is under direction of a new head coach — Chance Stewart.

Football fans may remember Stewart as the quarterback at Sturgis when it and Dowagiac were members of the SMAC.

The Trojans entered the game with a 2-1 record, while the Chieftains were 1-2. After 48 minutes of play, Dowagiac headed home with a 12-0 Wolverine Conference win over Sturgis.

Defense was the name of the game again for Dowagiac as it had to overcome three first-half turnovers by the offense.

Despite three straight turnovers, the Chieftains were able to keep the Trojans out of the end zone and off the scoreboard.

Dowagiac (2-2) used another big run to set up the game’s final touchdown in the third quarter.

KeShawn Russell broke loose for 42 yards and Malakai Haines finished the drive with a 4-yard run. Dowagiac chose to go for two, but failed on the conversion.

The Chieftains, who host Vicksburg in their regular-season finale at Chris Taylor-Alumni Field Friday night, finished with 234 yards of total offense, all of which came on the ground. Haines rushed for 11 yards on 28 carries. Russell finished with 51 yards on five carries and Collier 49 yards on seven totes.

McPhail was 0-for-1 passing with an interception. Dowagiac is now 0-for-2 throwing the ball this season with two interceptions.

Defensively, the Chieftains limited the Trojans to 31 yards of total offense — 11 rushing and 20 passing on 5-of-12 attempts.

Terrance Price led the way with 4.5 tackles while Kamryn Johnson had four tackles. Deny White and Brayan Paredes both had 3.5 tackles.

NILES — Brandywine and Edwardsburg both picked up wins on Friday night, while host Niles captured its own quad volleyball... read more