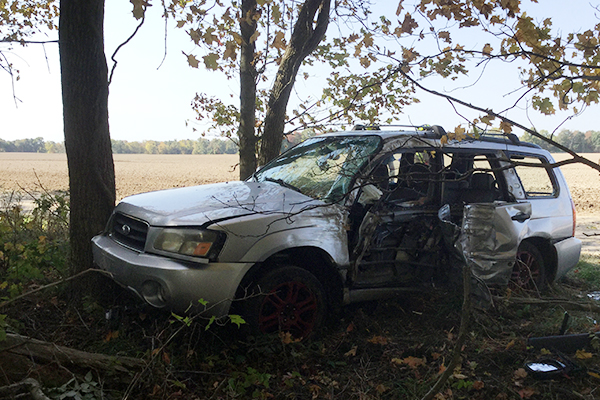 JEFFERSON TOWNSHIP — Three people were injured in a crash on Monette Street in Jefferson Township just before noon Friday.

Cass County Sheriff’s deputies were dispatched to Monette Street near Robinson Road in Jefferson Township at 11:58 p.m. Friday, due to reports of a single-vehicle crash that may have involved entrapment, according to a press release from the sheriff’s department.

By the time deputies arrived on scene, all occupants of the vehicle — including driver Kevin Lee Bender and passengers Brandon Allan Gould, and Tommy Allen Nehls Jr. — were out and being treated by Edwardsburg and Pride Care Ambulance.

Gould, 21, of Elkhart, was airlifted by Medflight to South Bend Memorial Hospital for treatment of his injuries.

Bender, 21, of Granger, was transported by Ambulance to South Bend Memorial Hospital. Nehls, 20, of Elkhart was treated at the scene.

Early investigation found that the vehicle was traveling East on Monette when it left the roadway and struck a tree.

All occupants of the vehicle were wearing seat belts, and alcohol does not appear to be a factor.