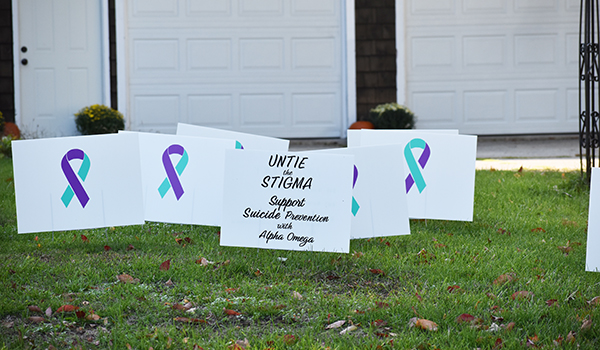 The yard signs from Alpha Omega chapter of Beta Chi sorority have been making their way around the community. Funds are being raised the American Foundation of Suicide Prevention as residents pay to send the signs away from their yards. (Leader photo/CHRISTINA CLARK)

SOUTHWEST MICHIGAN — Waking up and walking out the front door: something is different. There are signs in the front yard. Lots of them. Walking to the edge of the yard it becomes clear: the yard has been filled with signs by a local sorority, in a campaign titled “Untie the Stigma.”
Stephanie Holland, a Buchanan resident and national president of the Alpha Omega chapter of Beta Chi sorority, said the fundraising effort is for the American Foundation for Suicide Prevention by the chapter. The philanthropic sorority has seven different chapters in the U.S., its members ranging from women 27 years old to their late 80s, according to Holland. The Alpha Omega chapter has between 13 and 14 members.

“We raise money every two years for national research [associations],” Holland said. “Suicide prevention and suicide awareness hit home for a couple of us with pretty close family members.”

The fundraiser began on the last day of September, which is Suicide Prevention Awareness Month.

Just over a week into the fundraiser, Holland said it has been popular among residents.

“We have two sets of signs, and it’s actually been so popular that we are in the processing of creating a third set of signs,” Holland said.

This way, the sorority can have three sets of signs flocking to unsuspecting residents’ yards and raise more money to have them removed or put in another friend’s yard.

“[The signs] have been as far as Goshen, Niles, South Bend and Buchanan,” Holland said.

In years’ past, the sorority has done a similar type of fundraiser, using orange toilets and pink flamingos in place of this year’s signs.

“This year, we needed to figure out what type of thing we could do that relates to suicide. That’s when we decided to do the ribbon,” Holland said.

A yellow ribbon typically signifies suicide prevention, but according to Holland, teal and purple were used because it encompasses different types of suicide, including military and domestic violence-related suicides.

“[It’s] also a little bit brighter, and a little more fun,” Holland said of the colors. “We came up with ‘untying’ the ribbon and getting rid of the stigma. I think that a lot of suicide is the stigma. The stigma of going to get medical services. The stigma of asking for help. We’re just trying to untie the stigma and get people talking.”

Holland said more information for the fundraiser can be found on the group’s Alpha Omega Indiana Facebook page.

BERRIEN COUNTY — A crash occurred before 7 p.m. Wednesday when an Amtrak train and a vehicle collided north of... read more