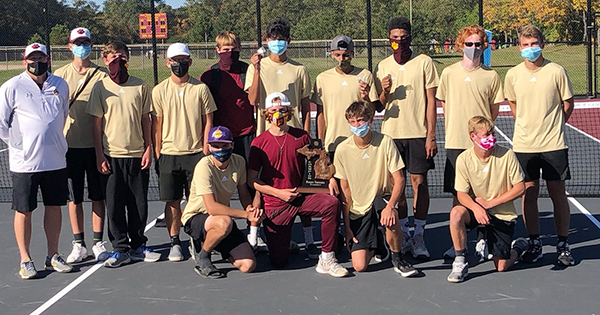 Due to COVID-19 and restrictions on the number of participants gathered at a single site, the MHSAA switched from its traditional regional format where individuals play matches in singles and doubles to create a team score, to having entire teams square off in other fall sports as soccer and volleyball do.

Each district champion advances to the state finals, which in Division 4 will be Oct. 22 to 24 in the Kalamazoo area for teams and at Portland High School for No. 1 singles players.

The Bobcats, who are 11-3-1 on the year, had no trouble advancing to the state finals as they defeated Bronson 6-2 in the semifinals, and BCS Athletic Conference foe Bridgman/New Buffalo/Lake Michigan Catholic in the championship match 7-1.

“I was real happy with the overall play today,” said Brandywine coach David Sidenbender. “The seniors came to play when it counted. Hosting an MHSAA tennis tournament was just unbelievable, and our girls coach [Joe Marazita], who was our tourney director today, just kept saying over and over how great it was.”

Winning two matches on the day for Brandywine in singles were Jacob Fox, Micah Gamble and Corban Gamble. Winning a pair of matches in doubles were Matt Veach and Bode Bosch, and Ragjit Gorja and Brody Prenkert.

While Sidenbender enjoyed the new format, he does not think the MHSAA will adopt it for further use.

“As far as the format, it was fun and it worked in our favor this year, but I don’t think it will last because a lot of really good teams will be let out of the final 16, and the state has always been about inclusion not exclusion,” he said.

Edwardsburg went 1-1 in its district as the Eddies defeated Wolverine Conference foe Vicksburg 6-2 in the semifinals, but lost to district host St. Joseph in the title match 7-1.

Harrison Smith, Isaac Merrill and Ethan Emanaker were all winners in singles play against the Bulldogs. Brady Layher and Trace Miliken were two-time winners at No. 1 doubles.

RICHLAND — The Wolverine Conference wrapped up its golf season with its annual tournament at Stonehedge Golf Course on Wednesday. Sturgis... read more