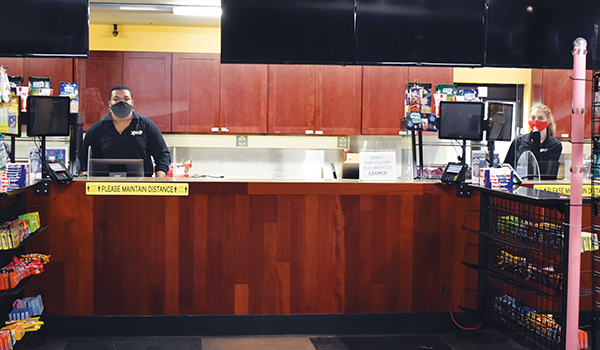 NILES — The show can finally go on.

Friday, the doors of Wonderland Cinema will reopen to welcome patrons back with the smells of popcorn and the familiar movie theater with new-to-them movies on the silver screens. Some changes and safety procedures are being put in place throughout the week as the staff prepares the theater to reopen with the new precautions residents have become accustomed to elsewhere. Staff members are busy getting back to work through the week as reopening day approaches.

Wonderland Cinema, along with movie theaters throughout the state of Michigan, was given the go-ahead to reopen its doors with conditions to customers after being closed for seven months due to COVID-19 mandates. Gov. Gretchen Whitmer signed an executive order on Sept. 25 allowing movie theaters, performance venues, arcades and bowling centers to reopen on Oct. 9. Under the order, 20 people per 1,000 feet or 20 percent capacity is the maximum allowed into each space.

Most of the staff has returned to their positions with Wonderland Cinema.

“We had a couple of people who went and got other jobs during the breaks,” said manager Izaih Dorsey. “Those people had just started a week or two before everything shut down. Most of the staff returned.”

During that time, Dorsey said the theater has made improvements while it was empty.

Staff members were inside the cinema Tuesday getting back into their work schedules, cleaning and preparing everything to reopen the doors on Friday.

The fresh curtain panels on the walls in the theater brighten the space when the lights are up, and help direct and absorb sound when the movie begins.

Changes moviegoers can expect will mirror what other businesses have already adapted, including plexiglass dividers at registers, every other register being closed to maintain spacing, and hand sanitizer available near each high-touch station like doors and near concessions areas.

One of the biggest changes regulars will notice is no longer being able to do self-service for fountain drinks and popcorn.

The bar and café seating area will not be open immediately.

According to the theater’s Facebook posts, the theater’s popular bucket refill policy will change to adapt to safety precautions.

The team can no longer refill the reusable popcorn bucket purchased. Instead, patrons can bring in their bucket to present to the staff, and a popcorn bag sized to fit the same amount will be dispensed. Staff will also be dispensing popcorn toppings, instead of patrons serving themselves.

According to Wonderland Cinema – Moore Theatres website, there will be seven movie offerings starting Friday. Five of them are newer 2020 releases, including “Tenet,” “The War with Grandpa,” The New Mutants,” “Unhinged,” “The Broken Hearts Gallery” and “Henchmen.” Disney’s “Coco” from 2017 will also be shown. Showtimes and pricing are available on the Wonderland Cinema – Moore Theatres website.

Seating will be a bit different as well.

“It will be every other row, and a maximum of six people in one group [seating],” Dorsey said. “If your group is smaller, then it will be fine. We’ll leave two seats in between groups. If you have a group larger than six, you can pick how to space out in groups of up to six.”