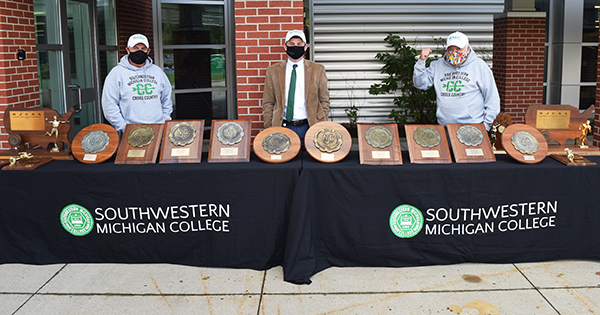 Southwestern Michigan College is refurbishing its cross country trophies that will be a part of its new recruiting gallery in the Student Activity Center.. (Submitted photo)

DOWAGIAC — With Southwestern Michigan College resurrecting its legendary cross country program in the fall of 2021 after a 25-year hiatus, a flurry of preparations is under way.

Championship trophies have been refurbished, and a $40,000 fundraising effort has begun to create the new Recruiting Gallery in the Student Activity Center to display them.

“We’re getting close to $8,000. We want to raise half by Halloween and the other half between Halloween and the end of the year,” said President Dr. Joe Odenwald. “Anybody who gives $100 gets a special limited-edition hat or a sweatshirt. Anybody who gives $200 gets one of each. These are the first SMC cross country items made in over two decades.”

Ron Gunn, the Hall of Fame coach who made “Fire Up!” synonymous with SMC athletics, Oct. 1 visited the campus he helped grow from his 1967 arrival over the next four decades.

“This is fabulous,” Gunn said. “It’s almost unbelievable that they’re going to do it, but it’s definitely the right move, and it really touched me and fired me up! This can be the catalyst for a lot of great things. We’ve got the trails. We’ve got a beautiful campus with (residence halls) and academic programs.

“Southwest Michigan is a wonderful place to train. I’m going to talk to the new coach (expected to be announced Oct. 26) and make suggestions for going out to Lawless (Park), Russ Forest and the sand dunes at Grand Mere.

“Cross-country runners are some of the best students in school,” Gunn said. “They’re smart and work hard. I think it’s a very good move with a lot of positive spinoff in terms of getting their friends to come.”

Gunn said he is excited for the new cross country developments.

“I love Dowagiac and this area and I love this college,” Gunn said. “I had chances to go to Northwestern and Ball State,” among others. “Somebody asked me why I didn’t go to the top. I said, ‘I’m already there’ — and meant it. We were David (battling Goliath, like in the biblical story), we were giant killers. We beat several Big Ten and Mid-American Conference schools. It’s a good recruiting pitch. If a kid is not 110 percent sure where he wants to go to school, this is a great option. I had kids transfer to every NCAA Division 1 conference in the United States, including the PAC-10. They didn’t have that opportunity out of high school.

“John Roscoe was like that,” Gunn referred to one of his All-Americans who transferred to the Kansas Jayhawks.

Another All-American Gunn likes to recall is Darroll Gatson because they butted heads initially, though the Detroiter became SMC’s assistant coach in 1980-82.

“I got so many lunches from people coming in to recruit him,” Gunn chuckled. “He ended up going to the University of Alabama and was written up in Sports Illustrated as a ‘Bama Bullet’ (in 1978).”

Gatson guided Ferris State in 1985 and Western Michigan University in 1986-1988, then Michigan State University’s men’s track and field coach from 1996-2006, including winning 1999 Big Ten Indoor Coach of the Year.

Gunn has been inducted into both the NJCAA Cross Country Coaches Hall of Fame and the National Track Hall of Fame. He developed what is now a nine-mile trail loop with five access points around the Dowagiac campus and founded Steve’s Run, which continues today.

Board of Trustees Chairman Thomas F. Jerdon was an SMC student from 1982-84 and championed cross country’s revival since rewatching his favorite movie, “McFarland, USA,” with Kevin Costner.

“Most of my friends here were athletes and a phenomenal number of Roadrunners went on to become very successful,” Jerdon said. “Coach’s runners were especially great student-athletes and these trophies displayed today just represent a fraction of their success.  It put a newly-established community college on the national map. I don’t know how Coach had time to sleep! The enormity of his dedication, commitment and success cannot be overstated.”