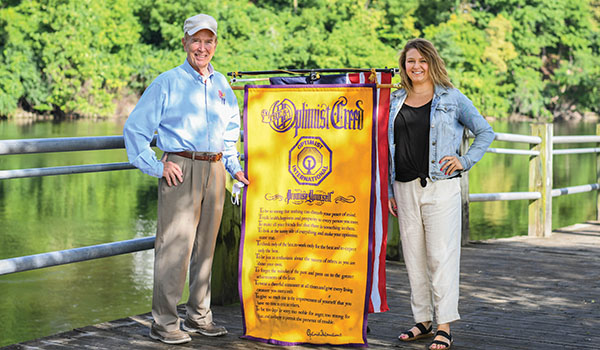 NILES — On a sunny afternoon in Riverfront Park, two members of the Niles Noon Optimist Club stood talking amongst themselves. Out in the fresh air, in the clear weather, their personal optimism was unmistakable. These two were excited to meet up, catch up and share their personal journeys and plans to celebrate.

The Niles Noon Optimist Club celebrated its 50th year at the end of September. The club’s chapter was founded in 1970, and has remained active ever since.

Dr. Michael Listenberger, a retired Niles optometrist, has been a member of the club for 48 of those years.

When he attended his first club meeting 48 years ago, it was a friend, an insurance salesman, who introduced the idea to him. Listenberger really did not know much about the club itself.

“I totally believed him and trust him, and he invited me to the meeting,” he said. “I didn’t know much about it at the time. Really, the youth work and the community involvement drew me in and sealed the deal for me. It grows on you. You see all the good things.”

During normal years, the Niles Noon Optimist Club meets at noon on Tuesdays at Ho Ping Garden in Niles, where they typically host a special guest to provide a program about a community effort or issue. The club also sponsors a youth soccer league, as well as various fundraisers to fund scholarships and other initiatives.

Spending time with Listenberger and the club’s current president, Sammee Schaller, it does seem impossible to hold onto a bad mood.

Listenberger is even wearing one of the local club’s face masks that reads “Optimism is Contagious.”

“We are living in times of fear and anxiety. We’re worried about this and that. We’re afraid, and yet, to live there is not a healthy place to live,” he said. “But to be optimistic and take it on… in other words, we have a choice: We can pine away and do crazy things. Get all upset and polarize ourselves. But yet, what can we do to make a positive difference? Everybody in their life can do something positive to give someone support. Even something simple like wearing the mask and respecting social distancing.”

Reaching out to others and listening or writing letters are also ways that Listenberger said people can make a positive impact on one another even when gatherings are limited. “That’s who we are and what we do,” he said.  Schaller agreed with Listenberger.

She came to the be a member of the club’s chapter between four and five years ago. Now president, she reflected on what drew her to the service organization. She had been asked to give a program during one of the meetings about her work at the YMCA of Greater Michiana, where she currently serves as the aquatics director. The club’s value on optimism was important to her.

“I think optimism is something you choose. It’s a lifestyle,” she said. “It brings so much joy when you can have optimism and can look at the glass  as half full instead of half empty. You naturally can live a healthier lifestyle, a better lifestyle, and those around you, you can support them.”

A part of each meeting is a recitation of The Optimist’s Creed. The creed includes 10 lines of promises to make to oneself as they recite it.

“When you read the Optimist’s Creed, it really puts things into perspective and makes you think of the important things in life,” Schaller said. “It helps you get out of a funk you may be in. It helps you see things clearer. It helps you understand the importance of what we do as Optimists every day and why we do it.”

Her favorite line, the one that Schaller finds most meaningful for herself, is the fourth line of the creed. It reads “to look at the sunny side of everything and make your optimism come true.”

Schaller finds that line most meaningful because she knows the feeling one can get caught in of “never catching a break.”

“There are months, weeks, days, hours and moments that you just feel like things are not working out the way they are supposed to,” she said. “When I repeat that phrase of the Optimist Creed in my head it makes me perk up. It gives me reassurance that I am in control and can decide how my day is going to go.”

Listenberger carries a copy of the creed in his car and knows it by heart.

The history of all of the events over the past 50 years of the club has been extensive. Listenberger remembers the soapbox derby from earlier in his tenure with the club. The Optimist International Oratorical Contest, Bear Lake Triathlon in Muskegon, and the youth soccer leagues are all fond memories of events, fundraisers and service projects he has participated in through the years.

Now Listenberger said it’s time to look ahead — starting with the club’s president.

Schaller is one of the younger members of the Niles Noon Optimist Club chapter. As president, she has taken on the challenges of finding how the club stays in touch when they cannot meet and finding ways to serve the community when they can.

One of the biggest tasks within the club she took over initially was the youth soccer leagues. She said there were tears shed when she realized just how big of an undertaking it would be. When the day arrived to kick it off, she said all of the work was immediately worth it. “This is why I’m a part of the club. This is why I enjoy it,” she said. “Our youth is our future, and if we can’t help build them and have them be successful, caring and respectful people, then we aren’t doing our jobs.”

As the club celebrates its first 50 years, its members look forward to the next. “We used to have corporate sponsors and several more dynamics,” Listenberger said. “There are barriers to running a volunteer business. Times are different. So, we are restructuring and reinventing ourselves.”

Schaller agreed. “We are rebuilding.”

SOUTHWEST MICHIGAN — Fire Prevention Week is being celebrated nationwide this week from Oct. 4 through Oct. 10. Typically, this... read more