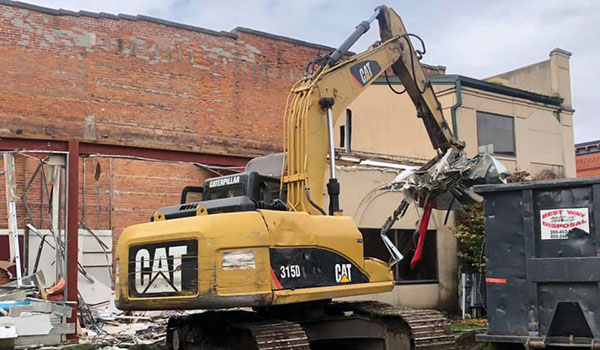 DOWAGIAC — A downtown Dowagiac building is being demolished as part of the city of Dowagiac’s downtown development plan.

Nick Fryman’s Construction began the demolition of the building at 135 S. Front St. on Thursday.

Originally housing 1st Source Bank, and later Art ‘Enah Suit, the building is being removed by the city of Dowagiac prior to the redevelopment of Beckwith Park.

The building has been vacant since Art Enah Suit moved to its current location at 115 S. Front St. in November 2019.

“The structure needed to come down,” said Dowagiac Assistant City Manager Natalie Dean. “It had a host of foundation problems that needed to be addressed. The city is in the process of redesigning Beckwith Park to become more of a gathering spot downtown.”

The city’s long-term plan to renovate and improve the condition of Beckwith Park began with the removal of the long standing gazebo in June 2018. Built on the former grounds of the Beckwith Theatre, the park is filled with trip hazards, settling ground and safety concerns. The city purchased the building late last year with the goal of demolition in mind.

Dean said that the demolition process will move relatively slowly, as to prevent causing damage to Round Oak Revisited, which is a restaurant right next to the building.

“They’re taking it slow,” Dean said. “In order to protect the foundation of the building, as well as neighboring structures, they’ll need to do it slowly.”

Dean anticipates the demolition portion of the process to be completed before the first snowfall.

Once the demolition is complete, Lounsbury Excavating will begin working on improvements to the park, which include the compaction of soils, adding four parking stalls, returning the memorial bricks to a patio, relocating public art and adding benches and tables while retaining open space for larger gatherings and community events.

The estimated cost for demolition and improvements is $200,000.

SOUTHWEST MICHIGAN — Fire Prevention Week is being celebrated nationwide this week from Oct. 4 through Oct. 10. Typically, this... read more