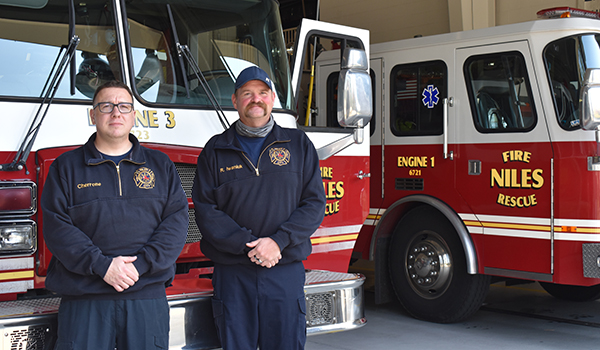 SOUTHWEST MICHIGAN — Fire Prevention Week is being celebrated nationwide this week from Oct. 4 through Oct. 10.

Typically, this means fire safety education presentation would take place in schools to teach students the importance of stop-drop-and-roll, having a safe meeting point in the yard for the family in case of an emergency and giving tips on getting out of a house where there may be a fire. With COVID-19 changing schools’ plans this year, local firefighters are adapting their messaging, but still working to get it out to area children and families.

The Dowagiac Fire Department is posting safety tips on its Facebook page all through the week from the National Fire Protection Association.

“During ‘normal’ years, we are usually at the schools,” said DFD Deputy Chief Robert Smith. “Most are pretty cognizant of safety.”

Smith said his staff usually uses Cass County Firemen’s Association’s fire safety trailer. The trailer has fake smoke to simulate a fire scenario where students would have to navigate safely out of the structure. It also includes a door handle that warms up, so students can test the temperature with the back of their hands to know where to go as they crawl beneath the smoke and find their way out.

“We’ve been putting together material for the schools,” Iwaniuk said.

Activity books tailored for different grade levels will be accompanied by a video for classrooms participating in the Fire Prevention Week with the NFD at this time.

Without being able to do regular programming in schools due to them not meeting in person or limiting visitors, depending on the school district, the departments are still putting out information and reminders to residents.

One of the major things Iwaniuk is emphasizing this year is having smoke detectors in the home.

“I’m of the belief of that the more smoke detectors you have, the faster you can get out,” he said.

Iwaniuk said it is important to remember in a fire to get out and stay out. There is more danger than the fire alone.

“It’s the smoke, not just the fire. The environment has changed,” he said.

Iwaniuk has been a firefighter since 1992. He said today, due to how many items in the home are made from plastics, that fires are even more dangerous.

“Fires double in size every 30 seconds,” he said. “Everything is plastic, so it burns faster and hotter. It burns like oil.”

Both Smith and Iwaniuk want to remind parents and students to set a safety point for families to meet at in case of an emergency and to review their safety exit plans.

Checking smoke and carbon monoxide detector batteries, and testing regularly, is also something each department reminded residents to do.

The battery life for the detectors is projected for 10 years, but Iwaniuk said many need replaced around the seven-year mark. He said the same is true of carbon monoxide detectors.

Both the NFD and DFD firefighters included reminders of being safe in the kitchen while cooking. Both reminded parents and caretakers to keep pan handles from dishes on the stove out of reach of children. They also urged people cooking to be mindful of their dishes and to not get too distracted while making a meal.