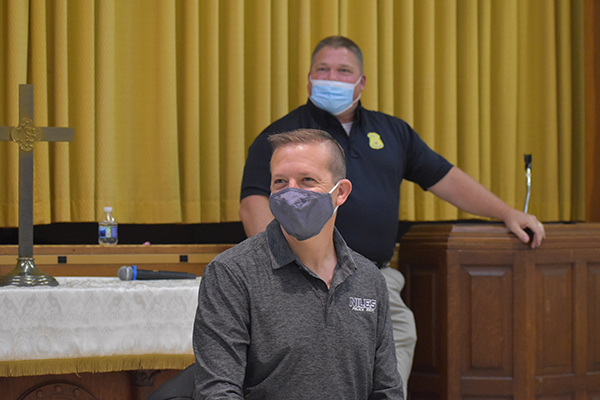 NILES — Diversifying the police force and building stronger trust between the community and police officers were front and center of discussion at a community meeting on Friday.

Around 15 people filtered into St. John’s Church of Christ for an hour-long opportunity to speak with Niles Public Safety Director Jim Millin. With Millin was Niles Police Capt. Kevin Kosten.

The event was hosted by HOPE – Helping Our People Evolve, a nonprofit community group. The format took the form of a town hall style meeting, where questions would be posed by attendees to both Millin and Kosten to address.

“We are a passionate group of people from all walks of life who have come together to address the needs of our community,” Woodson said. “We do this by asking people directly what they need, and then we develop strategic plans to deliver on these needs. We also talk about our mission: advance in education, spirituality and civic affairs. Affecting the community, one by one.”

During Millin’s introduction, he told the attendees his progression from beginning as a police officer in 1987 to his journey to becoming police chief, and now Niles Public Safety Director, which bridges both the traditional police chief and fire chief positions.

“Rest assured, while I’m not a fire chief per se, those guys, you’re in good hands. Those are some really good guys out there,” Millin said of Niles firefighters. “They don’t need me telling them how to fight fires – they know. They know what they’re doing.”

Kosten introduced himself briefly. He moved to the area 24 years ago when he began with the Niles Police Department.

“I came down here for the job. I liked the community. I liked the job. I never left,” Kosten said. “Some of you may recognize me. I was assigned to the schools for a long time.”

HOPE member Ricky Fouche asked the officers about bringing more diversity and equality to the area.

“What do you [intend to do] to bring more minorities to Niles?” Fouche asked. “What can we do to bring diverse and minority people here to serve on the police force?”

Millin responded there is currently an opening for a police officer at the Niles Police Department. The position has been open for nearly two months, with only three applicants. All three applicants are white males. With recruitment down across the nation, said Millin of minority officers are in even higher demand by larger departments, Millin said.

“Unfortunately, there aren’t as many African American police candidates as there probably are Caucasian. So many other agencies are looking for them just like we are,” he said.

He went to speak about efforts made in the past to recruit, and foster interest in criminal justice and law enforcement career tracks in the schools.

“If there are children in the community, young men who haven’t decided what they want to do in life, I would love to sit down and talk to them about what it’s all about,” Millin said.

He then revealed the Niles police department has two women on its patrol force.

Doug Freeman, co-founder of HOPE, pointed out that the Niles Police Department has only had four black police officers in the last 70 to 100 years.

“Being that Niles is the largest city in Berrien County, how is the morale of your officers knowing that they’re at a deficit, as far as diversity?” Freeman asked.

Millin said he thought the officers recognized having a diverse police force as a benefit.

“With $35,000 in training, what percentage do you have for recruiting?” Freeman asked.

Milin cited the agencies the department reaches out to when there is an opening for an officer.

“I won’t say we budget necessarily for recruiting. We don’t hire that often,” Millin said.

The meeting ended after discussions of police officers working more in neighborhoods and schools to foster healthier relationships with children and teenagers in the community to build trust.

Woodson said she hoped HOPE could commit to hosting another town hall in the near future with the officers. Millin said he would make himself available for continuing conversations and future events with the community.