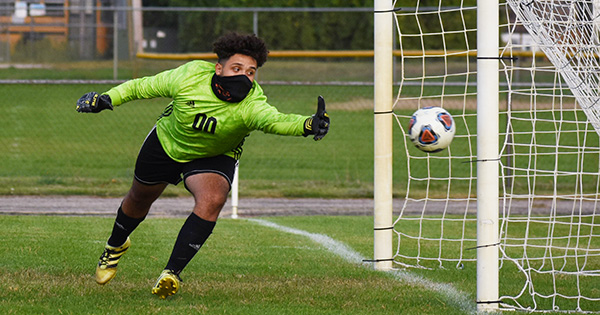 Alejandro Martinez had five saves in the Chieftains’ 4-1 win over Niles on Saturday. (Leader file photo)

DOWAGIAC — A pair of goals in each half helped host Dowagiac defeat Niles in a non-conference soccer match on Saturday.

The Chieftains got a pair of goals in each half to earn the 4-1 victory over the Vikings.

“We started off slow, not possessing the ball well in the first half,” said Dowagiac coach Mike Williams. “Second half was more controlled and gave ourselves better scoring opportunities.”

Henry Weller and Freddy Brito scored unassisted goals as Dowagiac grabbed a 2-0 lead on the Vikings.

Niles (5-5-1) was able to cut the lead to 2-1 before halftime, as Kyle Bruckner scored on a penalty kick.

In the final 40 minutes, Isaac Saavedra scored off an assist by Gustavo Cruz, while Noah Green scored on a penalty kick.

The Chieftains (6-2-1) held a 12-6 advantage in shots on goal. Alejandro Martinez had five saves for Dowagiac. Antwon Whitelow had eight stops for the Vikings.

“We passed the ball around well today,” said Niles coach Abel Fonseca. “Made some good connections from zone to zone. It was a 0-0 game until about 15 left in the first half when Dowagiac got its first goal on a corner kick. Then [we had] a bad kick out from our goalie that went straight to a Dowagiac player that was then able to shoot it quickly to an open goal to give them a 2–0 lead.”

LANSING — Starting Monday and running through October 19, researchers from Michigan State University will be working with police agencies... read more