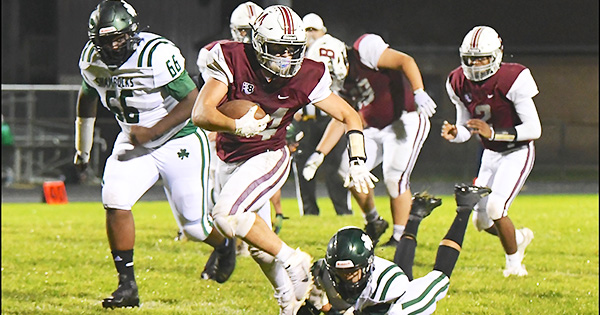 By the time the Shamrocks scored, the Bucks were on their way to a 31-15 victory and a 3-0 record.

Keeghan Pelley had a pair of touchdown runs for Buchanan, which finished with 276 yards of total offense, including 94 yards on the ground. Pelley finished the night with 72 yards on 11 carries with touchdown runs of nine and 28 yards.

Johnny Rager also scored on a 7-yard run, as well as caught a 29-yard touchdown pass from Connor LeGault, who was 12-of-19 for 182 yards. Rager had five receptions for 71 yards.

The Shamrocks (1-2) had just 207 yards of total offense, split between 98 yards passing and 109 yards rushing.

Defensively for the Bucks, who forced two turnovers, Gavin Fazi had eight tackles, Drew Glavin had five tackles and Darius Griggs had 4 1/2 tackles. Pelley and Troy Holloway both had four stops.

The Bucks host Comstock in a BSC contest Friday night. Kickoff is set for 7 p.m.

BENTON HARBOR — Visiting Niles could not match the speed and athleticism of the Benton Harbor Tigers in a 42-6 non-conference loss Friday night.

Niles (0-3) got its only score in the second quarter when Collin Hess rumbled 46 yards to the end zone. The Vikings missed on the extra point attempt. Hess finished the night with 114 yards on the ground.

NILES — It wasn’t pretty, but the Brandywine football team will take it. A 1-yard go-ahead touchdown run from Michael... read more