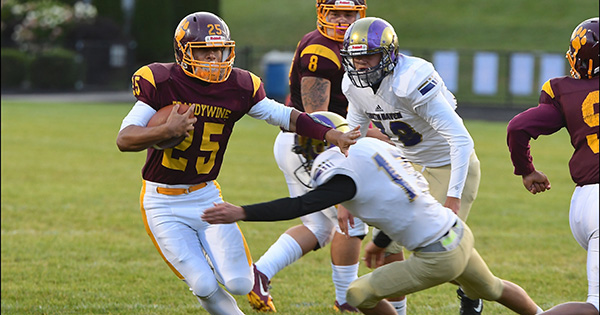 Ivory McCullough tries to get away from a South Haven defender in the Bobcats’ 28-22 BCS victory Friday night. (Leader photo/KELLY SWEENEY)

NILES — It wasn’t pretty, but the Brandywine football team will take it.

A 1-yard go-ahead touchdown run from Michael Palmer with 31 seconds left in the game lifted the Bobcats to a 28-22 win over South Haven Friday at home.

“These kids have a lot of character, a lot of heart and a lot of perseverance,” said Brandywine coach Mike Nate. “At halftime, I wasn’t so sure if we could come out and do what we needed to do, but we did. That says a lot about the team and in moving forward, we can really grow from this because we were behind a couple times and we came back. That shows a lot of character. It was no doubt an exciting game. It’s too bad we hit don’t have a lot of fans but maybe we’ll towards the end of the year. That was a heck of a game. That was a barn burner.”

The score was the result of a nine-play, 65-yard scoring drive that almost was not.

After Brandywine’s defense came up with a fourth-down stop to get the ball back with under four minutes to go, South Haven returned the favor by forcing a 4th-and-2 before an offsides penalty — one of 11 penalties on the Rams — gave the Bobcats a fresh set of downs to work with on the Rams’ 37-yard line.

Moments later, Bobcats quarterback Gabe Gouin kept it himself and ran 35 yards down to the 2-yard line, setting up Palmer’s game-winning run.

South Haven had a chance to tie or take the lead in the closing seconds. Back-to-back personal foul and pass interference penalties on the Bobcats set the Rams up in Brandywine territory. But the Bobcats were able to get some stops and forced an incomplete pass as time expired.

“We tried to mix up the run and the pass [on our last scoring drive],” Nate said. “We used the red formation and the ace package, but they stopped our option in the first half. They did a real good job on that and we went back to it on that last drive and [Gouin] had a 35-yard run and that kind of put us in position.”

After an Ivory McCullough touchdown put the Bobcats up 6-0, the Rams answered with a 10-yard Trent Till rushing touchdown to tie the game at 6 all.

A 19-yard Sean Tweedy touchdown run put the Bobcats back up 12-6 before the Rams responded with Winkel’s four-yard touchdown to retake the lead before halftime.

Brandywine got off to a strong start to the second half. The Bobcats defense forced a Rams three-and-out and after getting the ball back, embarked on a 12-play, 65-yard scoring drive capped by a Palmer touchdown to take a 20-14 lead late in the third.

“We came out of halftime knowing that on the first drive, we had to get a stop,” said Brandywine senior captain Cameron Barrier. That was the most important series of the game, and we came out there and got the stop. That’s what got us ahead because we scored on that next drive.”

But the Rams used an 8-play, 66-yard drive to set up a six-yard Till touchdown and a successful two-point conversion to retake the lead early in the fourth.

The Bobcats accumulated 347 total yards of offense compared to the Rams’ 300. South Haven had more than 100 yards of penalties, and Brandywine had three lost fumbles.

Palmer finished with 38 yards on eight carries and two touchdown runs, both coming in the second half.  Sean Tweedy had seven carries for 78 yards and one touchdown and Ivory McCullough added 15 carries for 59 yards and a touchdown.

Senior quarterback Gabe Gouin completed 9 of 12 passes for 110 yards and added 83 rushing yards on 15 carries. Jakob Luczkowski had five tackles, including three for loss and one sack.

“Michael Palmer hammered it in there for a couple of touchdowns,” Nate said. “It was good to have him back on the field. I want to single out Luczkowski on defense. He had a couple of sacks when we needed to win the game. They were driving. We needed to get the ball back, and man we did it. Then we drove down the field and showed a lot of character.”

Trevor Winkel led South Haven with 17 carries for 116 yards and one touchdown while Trent Till tallied 10 carries for 63 yards and two touchdowns. Winkel added 14 tackles on defense and Till 11.

Nate was quick to give credit to a much-improved South Haven outfit that defeated Niles 34-14 last week to snap a 29-game losing streak.

“They’re much improved,” Nate said. “The coaches are doing a great job. That offense they run is something you don’t see very often but it’s really hard to stop if you don’t if you’re not prepared. We tried to prepare and practice. We tried to get kids to simulate it and you know, of course, they can’t run it as well as [South Haven] can but you know, our defense came up big when they had to tonight.”

Brandywine moves to 2-1 on the season and will host Allegan (0-3) at 7 p.m. Friday in this year’s Homecoming game.

“We came up a loss last week,” Barrier said. “So, now that we’re back on the winning track, hopefully, we can just roll with it, especially on our Homecoming.”

DOWAGIAC — The truth is out there, and the Lost Cryptids Conservatory aims to uncover it. The research group will... read more