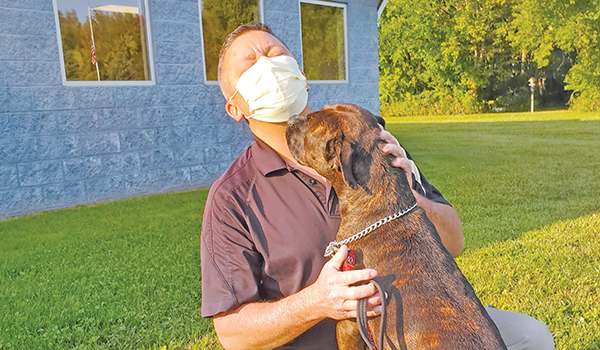 Pictured is Cass County Animal Control Director Ron Butts with dog Callie before she was reunited with her owner.

CASSOPOLIS — As Venes Mosier walked around her Hopkinsville, Kentucky home this week, a phone pressed to her ear, her dog, Callie, was never far behind. As Mosier talked, the tip-toe of Callie’s paws could be heard in the background.

“She’s been like this all week,” Mosier said, her breathy laugh echoing over the other end of the receiver. “She’s always at my heels. She always needs to be near her mom, yes she does.”

Mosier said she believes Callie is making up for lost time. Last week, the pair were reunited after three years apart, thanks to Cass County Animal Control.

Just before Christmas in 2017, Mosier’s home was broken into, and her dogs, including Callie, were stolen. Heartbroken, Mosier never stopped searching for her beloved pets. She was reunited with one of her dogs but eventually began to believe Callie was gone for good.

But then a miracle happened.

As Mosier could not make the trip to Michigan due to health reasons, Mosier and Cass County Animal Control worked together to find a volunteer organization to transport Callie back home. Not long after, Callie and Mosier were reunited.

Mosier said the moment was an emotional one for her.

“I had tears in my eyes,” she said. “She recognized me right away.”

If Mosier learned anything from this experience, she said it is the importance of microchipping pets, as Callie’s microchip and registration made their reunion possible.

“Chipping is so important,” she said. “It’s really not that expensive, and to get [Callie] back and have her recognize me after all that time, I’d gladly pay that money again.”

To Butts, the experience is not only a lesson in the importance of microchipping, but it is also a heartwarming story that has lifted the spirits of his entire department.

“This was a feel-good story we all kind of needed,” he said. “It’s a nice happy story with all the doom and gloom that has been happening this summer. It really makes for the ending to a great day.”

As Callie resettles into her Kentucky home, Mosier said she is giving her lots of love to make up for the three years they spent apart.

“She is certainly happy to be home, and I’m so happy,” Mosier said.