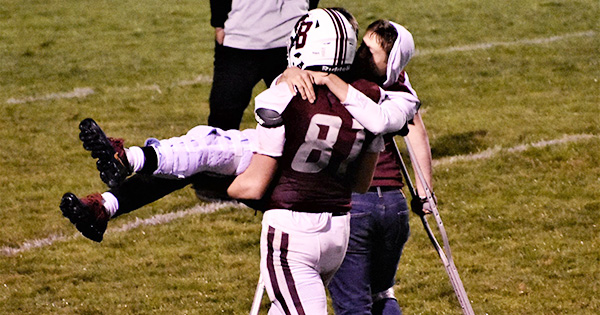 Buchanan’s Gavin Fazi carried quarterback Levi Zelmer to the end zone so he could celebrate a victory with the rest of his teammates following the South Haven victory. (Submitted photo)

Anyone who has followed my columns for more than three decades knows my passion for high school sports.

You understand that I feel that athletics are an important part of well-rounded high school experience, and in some ways, is more important. Not more important than learning how to read and write, or as important as learning skills that can help make you successful in your future endeavors.

But one area of sports that trumps those things is learning about real-life — learning about the ups and downs and learning about dealing with success and adversity. Those are things that really cannot be learned in a classroom the same way they are on a high school field, in a gym, on a mat or on a court.

Those are learned through the experiences of coming together as a cohesive unit, learning how to interact with your coaches and teammates, while working toward a common goal that leads you to bonding together for a greater good.

The word family is often used when talking about sports teams. It is true in every sense of the word. You laugh together. You cry together, and yes, sometimes you have disagreements. But in the end, it is about the common goal and your band of brothers and sisters. For some kids, unfortunately, it is the only true family unit they know.

Let me give you a great example of this. I received an email about a week ago from a Buchanan Bucks fan. He relayed a story to me that exemplifies everything good about high school sports. It was a story that once again renewed my faith in the common man and that all we have not lost all our common decency.

During Buchanan’s game two weeks ago, Gavin Fazi showed everyone in the stands at Memorial Field what it means to be a teammate. He gave the fans an example of what it means to never leave a man behind. He also showed everyone that things are not as bad as they seem right now with a pandemic, economic woes and a contentious election that is diving our country.

Buchanan quarterback Levi Zelmer suffered a pretty serious injury on the game’s first offensive play against South Haven. Zelmer would return to the sidelines in a brace and with crutches to watch the remainder of the game, which Buchanan went on to win to improve to 2-0.

Fazi, who turned in a solid game on both sides of the football, is good friends with his quarterback Zelmer. So, when the game ended, he did not sprint to the end zone to join his other teammates as they started celebrating the victory.

Instead, he picked up his quarterback and carried him across the field to where the rest of the team had gathered so that he too could enjoy the victory as much as he could, not knowing how long he would be out for this season.

In a day when people are quick to criticize, spend way too much time complaining about things such as wearing a mask and sitting 6 feet apart, and only getting two tickets per participating player, in order just to have athletics, Fazi showed us what it takes to be a person of compassion.

He showed us what it means to be a good teammate. I do not know Fazi personally, but I know enough about his character from his actions and the photograph that accompanies this column, that he cares for others. He cares for his teammates and his community.

He did not learn all of that just from playing sports. That kind of empathy is learned first at home. But through his years of competing athletics, those traits were developed and enhanced.

I want to thank Gavin Fazi, who reminds us that being a good person is more important than anything else at the end of the day. Caring about others, sometimes more than you may even care about yourself, is vital in becoming a success — not a successful football player, not a successful student or businessman or women, but becoming a successful human being. I hope and pray that we all can learn the same lesson and make our world a better place than it is today.