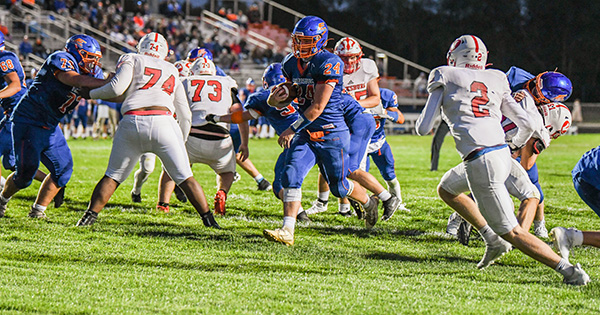 Edwardsburg will have a bye week after Plainwell canceled with game due to a positive COVID test. (Leader file photo)

EDWARDSBURG — For the second straight week, Edwardsburg Athletic Director Kevin Dean has been working the phones trying to find a Friday night opponent.

The Eddies’ Week 2 opponent, Detroit Country Day, had to cancel last week’s contest after having a positive COVID-19 test. Edwardsburg ended up traveling to Jonesville, where it was a 52-16 winner.

This week’s opponent, Plainwell from the Wolverine Conference, has had to cancel its game with the Eddies after a player in the program tested positive. The Trojans played last Friday night at Dowagiac, but the player did not participate in the varsity or sub-varsity games, clearing Dowagiac to move forward with this week’s home game against Wolverine Conference foe Otsego.

After trying line up a game the past few days, Dean said that the Eddies would not play this week.

“No, we are taking a bye week,” he said when asked if he found a replacement game.

Edwardsburg will return to the field on Oct. 9 when it hosts Three Rivers in a Wolverine Conference contest at Leo Hoffman Field.