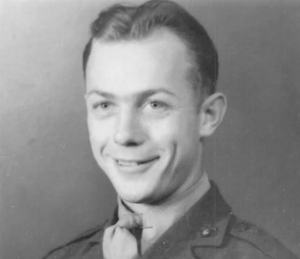 SGT Duane Cole was killed in action at Tarawa on Nov. 20, 1943, while proudly serving his country. Duane Cole was born March 8, 1920, in Spooner, to George and Hattie (Phelps) Cole. Duane lived in Barronett for the first seven years of his life and attended the Brickyard School before moving to Niles.

In 1939, he graduated from Niles High School. Shortly after graduation, he got a job at Garden City Fan Company as a spray painter.

On Sept. 4, 1941, he enlisted into the Marine Corps and did his basic training in San Diego. Shortly after the Japanese attacked Pearl Harbor, Private First-Class Cole was shipped first to Samoa than to Guadalcanal where he got his first taste of combat. As a result of his leadership during his time in Guadalcanal, Duane was promoted to Sergeant. His next stop was New Zealand for rest and to resupply. During his time in New Zealand, the effects of malaria he had contracted in Guadalcanal was taking its toll. However, Duane did not let it stop him, and he continued to impress his superiors with his leadership. New Zealand is also the place where he met his sweetheart, Muriel, with whom he sent many letters.

Duane then got orders to ship out to Tarawa to take part in the offensive to take control of the island from the Japanese. The battle lasted three days, during which 1,000 men were killed and 2,000 were injured. On the first day of the battle, Nov. 20, 1943, Duane was one of the fallen; his body was not recovered. It was not until Christmas Eve that his parents were notified of their son’s death. While there are no eyewitness accounts of Duane’s last moments, his family knows that he served his country with great honor and pride.

Thanks to the History Flight and DNA testing, SGT Duane Cole’s remains were found and identified.

On Feb. 24, 2020, the Department of Prisoners of War and Missing in Action Accounting Agency officially announced that SGT Duane Cole would be coming home. His family will now finally be able to lay him to rest.

SGT Duane Cole will be laid to rest at the Northern Wisconsin Veterans Memorial Cemetery at 1 p.m. Saturday, Oct. 3, 2020. Full military honors will be hosted.