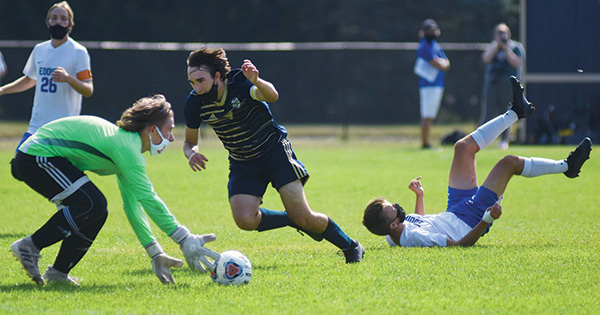 NILES — The Edwardsburg soccer team has struggled to score goals all season.

The Eddies scored two in its season opener, but only one since then.

So, when Harry Waldron scored off an assist from Devyn Arias, in the opening minutes of last Saturday’s non-conference match against host Niles, the Eddies were understandably excited.

The Vikings would score late in the first half to tie the match at 1-1 at halftime, but Edwardsburg added three more goals in the final 40 minutes to pull out the 4-1 victory.

“That was big,” said Edwardsburg coach Sean Jesse. “We really haven’t moved well. We are very young, so we are trying to work through some things. Plus, we had six games in 12 days. The past four days gave us time to work on some stuff. Getting that going because of things we literally worked on, I think the kids really felt like they could do it and have some success.

Kyle Bruckner scored the first-half equalizer off an assist from Casey Marlin. Niles played without its top scorer Dominic Thornton, who was taking the SATs on Saturday.

Warren Fessenden scored back-to-back goals in the second half to give the Eddies a 3-1 advantage. His goals were unassisted. Clay Edman capped the scoring off an assist from Alex Carfi.

“The rest of the game we played with our foot on the gas,” Jesse said.

Niles coach Abel Fonseca said his team has started slow all season. Giving up a goal to a team that had not been scoring set the tone.

“That is something we have been working on all season,” he said. “We come out sluggish. We are just trying to get over the hump. Our intensity is the biggest part of it. As we continue come out of the gate really slow, we give up some cheap goals once in a while.”

EDWARDBURG — The Edwardsburg golf team has hovered around a team score of 215 much of the 2020 season. That... read more