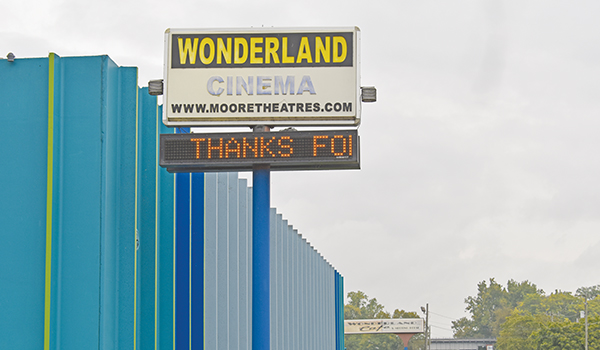 NILES — Scott Moore has “definitely not” been counting the months Wonderland Cinema has been closed due to COVID-19 mandates.

“About seven months,” Moore confirmed, without missing a beat.

Wonderland Cinema’s sign outside read “thank you for your support during curbside concessions and outdoor movies.” The cinema is looking forward to soon being able to host its guests indoors for the first time since March.

“Beginning Oct. 9, 2020, this order therefore allows for a new set of previously closed businesses to come back to return with safety precautions, including theaters and cinemas, other performance venues, and a wide variety of recreational facilities,” the order said.

By Monday morning, co-owners of Moore Theatres, Carol and Scott Moore were in meetings working out the new protocols to implement as they plan reopening dates for their theaters, including Wonderland Cinema in Niles.

The theaters have sat mostly empty during the mandated closures, with the owners preparing for its eventual reopenings with cleaning supplies and Plexiglass barriers.

“We just got off the phone with our booking person trying to figure out what types of movies are available,” Scott Moore said Monday afternoon. “We’re hoping he will get back with us and we will get a game plan going [for movie showings].”

Movies have slowed or halted shooting since the beginning of the COVID-19 pandemic. California, the home state of Hollywood, had some of the heaviest COVID-19 mandates early on. The state has allowed the film and tv industry to begin shooting, but adjusting to local mandates and precautions has continued to slow production.

Despite a shortage of new movies, the owners were both excited when they heard the news on Friday.  They look forward to being to welcome guests back into their theaters.

One of the caveats in the executive order released on Friday is that admission will be limited to roughly 20 percent of a theater’s capacity.

Another change the owners are looking at working out is moving away from self-service soda and popcorn. Roped off self-serve areas is a change returning moviegoers should prepare for.

“We’re going to have to do that ourselves for the customers,” Moore said.

He said through the week, the managers will be brought back into the theaters to meet and go over new changes and protocols.

“We have employees scheduled to come in on Friday to start training,” Moore said. “We’ve only got one week to train them and get them acclimated to some of the new things that people will not be used to. It will be a little bit of a hard time, but it will be OK.”