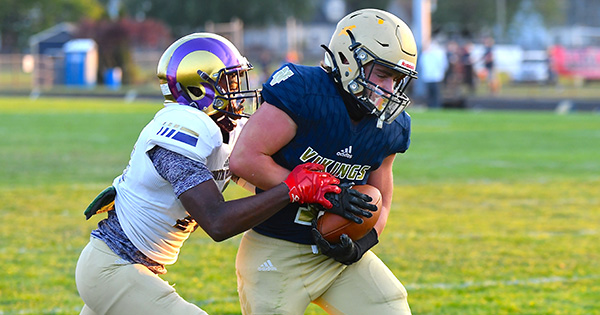 After losing to Berrien Spring last week in its season opener, the Vikings entered Friday’s game against South Haven expecting to win in front of their home crowd. After all, the last time the Rams won a game, Barack Obama was still the president of the United States. A win was all but inevitable.

Until it was not.

South Haven, winless in its previous 29 games, emerged victorious against the Vikings with a 34-20 win.

“We didn’t play very well at all,” said Niles football coach Joe Sassano. “It was just a lack of focus and we just weren’t dialed in. As a coach, I have to take responsibility for that.”

“I think we came in with our mindset in the wrong spot,” Hess said. “We thought we would whoop them because Buchanan did, and we could follow right along with them, but we couldn’t. We couldn’t show up like we were supposed to, and that’s the problem right there. We were too cocky.”

Hess finished with three touchdown runs on offense and a team-high nine tackles on defense, including two for loss.

“He plays hard all the time,” Sassano said. “I mean, he plays offense, defense and special teams. He really gets after it. He’s a tough, gritty player.”

Nathan Baker added 31 rushing yards and Chase Andres had five tackles and one sack. True freshman quarterback Talon Brawley entered the game in the second half after Starting quarterback Jason Matlock left the game with an injury, and performed admirably. He converted 2-of-3 passes for 21 yards and kept plays alive using his feet, including running for a first down on a 4th-and-7 play.

“We gave him some plays and let him do his thing,” Sassano said. “Obviously, he’s got some talent and he’s going to be a player down the road.”

The Rams outgained the Vikings 241-106 in rushing yards.

Niles struck first with a 2-yard touchdown run from Hess late in the first quarter to take 6-0 lead. But the Rams responded with a 14-play, 69-yard drive capped by a 20-yard pass from Bodfish to Thomas to tie the game at six apiece heading into halftime.

The Rams started the second half with a 7-play, 70-yard scoring drive capped by an eight-yard touchdown run from Till and went up 14-6 following a two-point conversion. Less than a minute later, Matlock fumbled the ball in Niles territory and South Haven’s Nolan Sholes picked it up and returned it for a touchdown to give the Rams a 20-6 lead midway through the third quarter.

A Hess touchdown cut the deficit to 20-14 with under two minutes remaining in the third, but the Rams responded with fourth-quarter touchdown runs from Winkle and Woodall to effectively put the game out of reach.

Niles will be aiming for its first win of the season when it faces Benton Harbor (0-2) at 7 p.m. Friday.

“We just gotta take it one day at a time,” Sassano said. “We hope that we see some guys that have major improvements. These kids have got to want to work. They’ve gotta want to get better.”

SOUTHWEST MICHIGAN — The stay-at-home orders experienced across the country may have triggered a house buying wave in consumers. Recent... read more