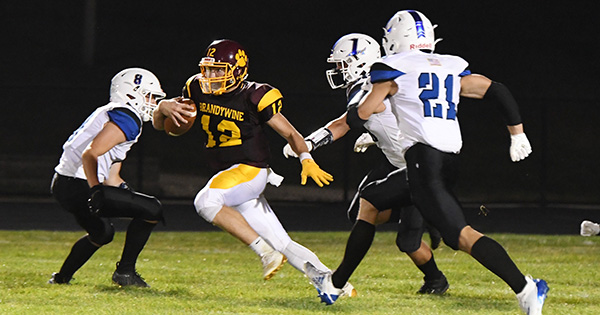 NILES — A sluggish start could not keep host Cassopolis from improving to 2-0 on the season as the Rangers knocked off Southwest 10 Conference for Decatur 27-0 Friday night.

In other action, Buchanan also improved to 2-0 with a 35-7 BCS Athletic Conference road win over Comstock, while Lawton defeated host Brandywine 42-25 in a battle of 2019 playoff teams.

CASSOPOLIS — Neither team found the end zone in the opening quarter, while the Rangers managed to score a touchdown in the second quarter against Decatur, but missed the extra point.

Daishean Jamison scored on a 2-yard run to give Cassopolis a 6-0 halftime lead.

The Rangers added a pair of scores in the third quarter to expand their advantage to 20-0 as Mason Polomcak scored on an 18-yard quarterback keeper, and Jamison added a 7-yard run. Logan Pflug was 2-for-2 on extra points.

The final score of the game came on a 2-yard Ahsan Hart run and Pflug kick.

Cassopolis finished with 318 yards of total offense, of which, 310 yards came on the ground. Jamison led the way with 158 yards on 14 carriers, while Hart added 74 yards.

Polomcak, who had 49 yards rushing, was 1-of-5 through the air for eight yards.

The Ranger defense held the Raiders to a total of 72 yards, all but two of which game via the ground game.

Matthew Walker had 15 tackles on Decatur’s 30 running plays. He also had a fumble recovery and a forced The fumble.

The Rangers hit the road for the first time in 2020 as they head to Centreville for a Southwest 10 Conference showdown with the undefeated Bulldogs. Kickoff is set for 7 p.m.

COMSTOCK — The visiting Bucks scored two touchdowns in each of the first two quarters to open up a 28-0 halftime advantage on its way to an easy league victory.

Johnny Rager scored three touchdowns — one via an interception return and two on runs of 59 and 65 yards — to finish the night 127 yards on just four carries. Rager had all but four of the Bucks’ yards rushing.

Connor LeGault was 3-of-8 for 76 yards and a 49-yard touchdown pass to Gavin Fazi.

Buchanan had 208 yards of total offense compared to 246 by the Colts. However, the Buchanan defense recovered two fumbles and picked off two passes.

Fazi had a team-high six tackles, while Keeghan Pelley had five and Troy Holloway four. Fazi, Pelley and Rager were all credited with sacks. Rager ended the night with a pair of interceptions.

The Bucks return to Memorial Field as they host Berrien Springs in a BCS contest. Kickoff is set for 7 p.m.

NILES — The Brandywine Bobcats had no answers for Lawton’s Jake Rueff, who rushed for 233 yards on 16 carries and scored four touchdowns. Rueff also caught two passes for 54 yards and another score.

Brandywine quarterback Gabe Gouin had a big night of his own with 102 yards rushing on 23 carries. He was 10-of-21 passing for an additional 143 yards and a touchdown pass to Cam Barrier, good for 58 yards.

Sean Tweedy finished with 75 yards on the ground and a pair of touchdowns. Jakob Luczkowski also had a touchdown run.

The Bobcats had 361 yards of total offense, which was much more balanced with 218 on the ground and 143 through the air.

Defensive leaders for Brandywine were Zach Anderson and Jordan Grice, both of whom recorded six tackles. Hunter Heath and Cruz Sanchez each had four tackles. Heath recovered a fumble.

The Bobcats are back at Selge Field on Friday night as they host BCS newcomer South Haven, which snapped a 29-game losing streak against Niles on Friday.

NILES — The Niles football team was ready. After losing to Berrien Spring last week in its season opener, the... read more