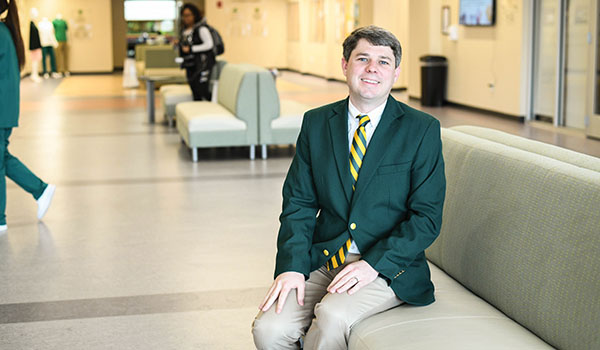 Joe Odenwald is the newest president of Southwestern Michigan College.

DOWAGIAC — Southwestern Michigan College was the topic at hand at the Dowagiac Rotary Club’s weekly meeting Thursday via Zoom.

SMC President Joe Odenwald was the special guest this week and discussed a variety of topics, including the college’s plan to both start the spring semester on Jan. 25 and offer 30 online classes in the spring.

“That start date will allow us to get more online classes ready,” Odenwald said. “It will give us time to address the COVID-19 trends after the holiday and monitor the vaccine situation. It also means that we will have a spring break that splits the semester, which we think will be beneficial for everyone. We need to have more online instruction in the spring, which is not as easy as it sounds. Some people don’t have good internet. We’re paying faculty additional stipends for their online training as we prepare for these online courses.”

Odenwald also discussed SMC’s enrollment, which is down 17 percent in large part due to the ongoing COVID-19 pandemic. Dual enrollment is down 20 percent.

“There’s a lot of uncertainty going on right now,” Odenwald said. “That seems to be common everywhere. The dual enrollment being down is just the reality of the K-12 world.”

According to Odenwald, the SMC has lost $750,000 in revenue because of the pandemic but was prepared thanks to a conservative budget for the fiscal year. SMC was also anticipating a 16 percent cut in state aid, but Michigan lawmakers signed off on a $62.75 billion state budget deal Wednesday afternoon, which included more than $17 billion for K-12 schools, community colleges and universities.

“We built a budget very conservatively for the year while anticipating a 20 percent economic decline,” Odenwald said. “It ended up being 17 percent, so we hit it about right. We assumed we’d lose some state aid and the good news is that the democrats and republicans actually got something done together by way of a bipartisan agreement.”

Amid the economic turbulence, Odenwald said that SMC has not laid anyone off nor has it cut anyone’s pay.

“I’m very proud of that,” Odenwald said. “I didn’t know if we were going to be able to do that, but we tried. The reality is when you start cutting people, your ability to grow and come back diminishes. So we’ve kept our folks home and honored our collective bargaining agreement. It’s been a heckuva year but I can’t say enough about our faculty, our staff and our students.”

Odenwald also gave an update on the cross country program, which is on track to return to the school next year following a 25-year absence. SMC won five National Junior College Athletic Association titles and three national marathon championships, which Dowagiac hosted on numerous occasions.

Odenwald said that the school is awaiting approval from the National Junior College Athletic Association. If approved, SMC would begin recruiting its first recruiting class of the new millennium Nov. 1.

“I anticipate that we will be approved,” he said. “I don’t know why we wouldn’t be. We’re creating a recruiting gallery in the student activity center and we’re going to have the old team trophies restored and displayed there. We want to pay tribute to the past but also propel ourselves into the future.”