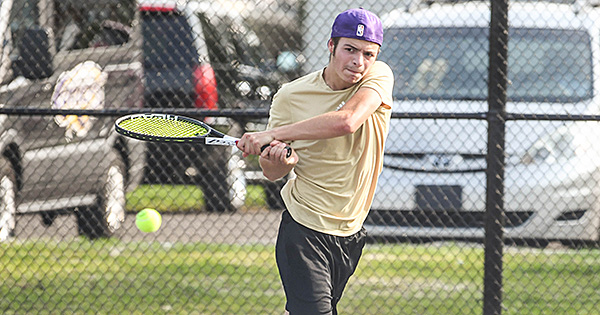 The Brandywine tennis team was defeated by Berrien Springs in a key BCS match on Wednesday. (Leader file photo)

NILES — It was a tough Wednesday for Brandywine and Niles in BCS Athletic Conference tennis action.

Both the Bobcats and Vikings were defeated in league matches by Berrien Springs and Bridgman/New Buffalo/Lake Michigan Catholic respectively.

At Berrien Springs, it was a battle of the top two teams in the conference. The host Shamrocks pulled out a 6-2 win over the Bobcats to improve to 5-0 overall.

The loss dropped Brandywine to 3-1-1 in league play.

Picking up wins for the Bobcats were Jacob Fox at No. 1 singles and the No. 3 doubles team of Bode Bosch and Matt Veach.

Visiting Niles continues to struggle on the court this season as the Vikings fell to 1-8-1 overall.

Winning matches for Niles were Chase Lotsbaich at No. 1 singles, exchange student Leonardo Passeri at No. 2 singles and Wyatt Mitchell and Rylan Custard.