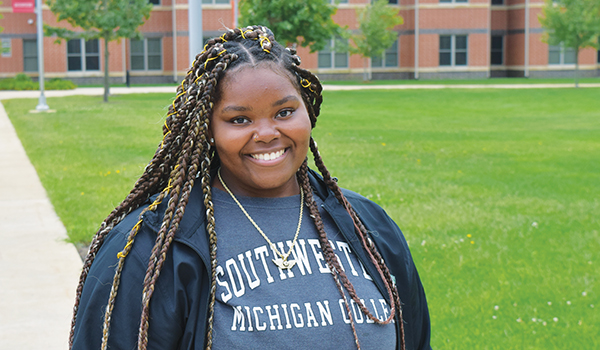 Before becoming an SMC communications major, Clay won Michigan Engineering Student of the Year and, in April 2019, testified before the Senate Appropriations Sub-Committee on Talent and Economic Development on behalf of Jobs for Michigan’s Graduates, which named her Student of the Year.

As Clay, who is registered to vote in her first presidential election, told legislators, “JMG changed my life. Like a lot of kids, I was told I would not amount to much. JMG showed me a different path, how employability skills mattered — things like communication, teamwork, showing up on time, critical thinking. Many students at my school have barriers to overcome, like poverty, growing up in foster care, crime, drug abuse. Our JMG team is there to help us not only overcome barriers, but succeed in school, employment and life.”

“I am so proud of what you have accomplished,” Chair Ken Horn of Frankenmuth responded. “These are stories that must be told across the state.”

Though she never left Michigan until her family moved to Iowa for grades sixth through eighth, through the BHHS Rotary Interact Club Clay spent three weeks in Havana, Cuba, on a water service project.

“It tore me to see the level of poverty people live in,” Clay recalled. “I don’t have much myself, but it made me very grateful for the things I do have and resources I have access to. People work two jobs, one for the government that’s very strenuous and some other form of work to provide for their families. It was very hard to witness. I got a manicure and a pedicure for a dollar. I gave her $10, which she wouldn’t take at first.”

Clay enrolled in communication skills, which required her to prepare, then present, three types of speeches. After researching topics and citing sources, she was charged with creating engaging presentations with ideas that flowed logically while keeping peers’ attention. As one of only two sophomores, she responded to the nurturing environment while bolstering public-speaking confidence.

Andrews convinced Clay she is not cut out for nursing after participating in a 2018 mentoring program.

“I don’t do well with blood,” she said, “but it was very interesting. I learned CPR and first aid. Being an RA will equip me with better communication skills and allow me to put my current communication skills to the test. I’m loving getting to know residents on a deeper level. This helps me get used to working with people who don’t look like me or believe the same things I do. This position will stretch and challenge me.”

Clay, who also enjoys painting, has a three-year background with Krasl Art Center in St. Joseph and worked in SMC’s ceramics studio. She is considering further stretching herself in the Ferris program for a bachelor’s degree in human resources management.

“I have a Renaissance soul,” Clay said. “I’m exploring. It’s hard to make up my mind about one solid path. Communication I’m head-over-heels interested in. I was always confident when it came to speaking up. I never had stage fright doing theatre or dancing.”

“I’ve always loved math and science,” said Clay, who participated in FIRST Robotics all four years of high school, switching from Michigan Lutheran to BHHS sophomore year. “I was team captain all three of those years and took them to state twice. One of my classmates and I taught robotics to fourth and fifth graders at Martin Luther King Elementary School in Benton Harbor.”

She applied to Stanford to appease her uncle.

“I did get accepted,” Clay said, “but I’ve always heard good things about SMC. I didn’t take the Stanford route because of communication. I realized when I interacted with their team, the community style I was searching for wasn’t there. I was just a number. I decided to start small and build my network. SMC is close to home. People I trust recommended this route because they felt SMC’s team is what I was searching for. I immediately enjoyed how positive the faculty is and how interested they are in student success. That drew me closer to SMC.”