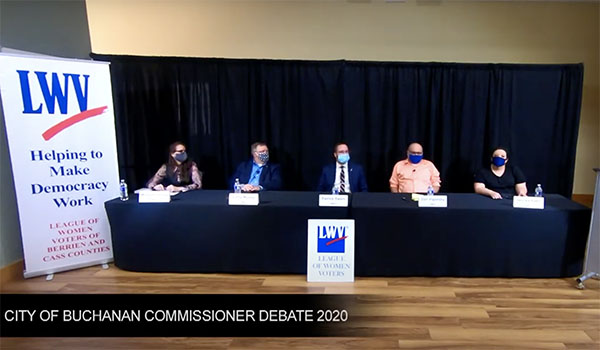 BUCHANAN — Tuesday, the community got to know the candidates running for Buchanan City Commission.

The League of Women Voters and the Buchanan Paper hosted a forum for candidates running for Buchanan City commissioner. The event, which was broadcast over YouTube to avoid a large gathering in line with COVID-19 guidelines, allowed guests to make opening and closing statements and answer a series of questions. Topics covered over the nearly two-hour forum included marijuana, downtown development, COVID-19, the role of city government and more.

The first question of the night was: It is said that our democracy is of the people by the people and for the people. If you are elected, what would you do to ensure those principles are followed in Buchanan?

Lemay spoke first, saying she would ensure the public would have all the information needed through channels such as TV and social media to get involved with the city.

“I believe transparency is the number one key,” Lemay said. “Communication is key.”

Speaking next, Money also called for transparency in city government.

“Also accountability and communications,” he said. “Without accountability, we are just not going to be able to function and go the way we need to go.”

Also calling for transparency, Swem said he believes it is the government’s role to represent what the public wants.

“They trust us to make those decisions,” he said. “At the end of the day, this is about serving our residents.”

Vigansky answered the question by saying it is the public’s job to hold elected officials accountable.

Yoder also called for transparency, saying that social media could share information with the public.

“We are moving into a new generation, and we need to move with it,” she said. “I think we can be a lot more transparent with what we have.”

In light of current events, candidates were asked the following question: The COVID pandemic has taken a toll on businesses, including Buchanan. Do you have a proposal to help local businesses emerge successfully from the challenge, and if so, what is it?

Swem, who works in the financial sector, said he saw the commission’s place as connecting businesses with existing resources rather than creating new funds.

“At the end of the day, these businesses don’t need a bailout. They don’t want that,” he said. “There are plenty of opportunities, and it’s our responsibility to make them aware of those. That’s where I see our impact being. It’s not another check from taxpayers at the end of the day.”

In her answer, Yoder agreed that businesses could be connected with state and federal resources, but said she did not have a proposal.

“I wish I had an answer,” Yoder said. “This is such uncharted territory that I don’t think any of us has an answer to where we go from here.”

Lemay said the community needed to be educated about where residents could go for help and talked about her experience connecting seniors to resources as she sits on the senior center board.

“My recommendation is we have schooling for our businesses,” she said. “The chamber can help out with that. We can do this together.”

Vigansky said the best course of action would be for businesses, employees and the economy to go back to work.

“I want to go back to work and back to life,” he said. “If you are scared of this, and it is a bad disease, hibernate. But don’t demand me to wear a mask and stay home.”

In his turn to speak, Money also called for community education, while encouraging residents to shop local.

“The business owners have opportunities to offset their costs,” he said. “It’s also the responsibility of the citizenry of Buchanan to also help economically to ensure Buchanan does thrive.”

In their closing remarks, the candidates thanked the public for their time and made one last appeal for their candidacy.

Yoder spoke first, acknowledging that she is younger than most on the city commission.

“When you think of city government, I am a different face to see, and that’s OK,” she said. “Different is good. Different is fun, and we are moving into a different time period. I just want to reiterate how much I love Buchanan. I love the way that it is, and I want to continue growing it.”

In his statement, Vigansky spoke about his previous candidate race and time as a commissioner. Earlier in the evening, he said his experience would guide the city.

“It’s a full-time job in a lot of ways,” he said. “Either you are going to like it, or you are going to hate it. If you hate it, get out and let somebody else take your spot because all you are doing is wasting everybody’s time.”

Next was Swem, who spoke about his relationship to the community and his work experience in the financial sector.

“I hope you trust that I would be a good steward of your money,” he said. “I look forward to serving you and hope you see the impact my family has made over five generations.”

During his remarks, Money said each candidate would serve the city well, but as one of the oldest candidates, he has seen the community go through good times and bad and now wants to help lead it.

“I want to be a part of that growing process we are having, and I thought this would be the best way to do that. I’ve served this community in a lot of ways,” he said. “I just hope I can meet the expectations of the people of Buchanan.”

The last candidate to speak was Lemay, who said the competition would be tight as each candidate wants to serve the community well.

“I love Buchanan,” she said. “We want to serve you. We want to listen to you. We want to help you. … I want you to know, you can’t make a bad decision here. It’s about what speaks to you best.”

NILES — The Brandywine soccer team used a pair of goals from Clayton Adams to edge host Bridgman 3-2 in... read more