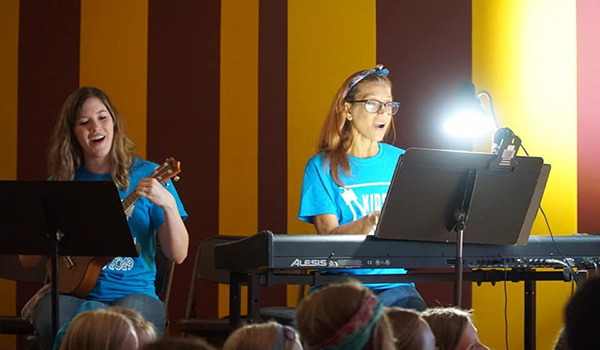 NILES — When the leadership of Performing Arts Workshop announced its first merit-based scholarship, it was to do so in the memory of a professional and a friend they had worked with in 2019.

The Lauren Widner Scholarship Fund was recently created by the leadership team at PAW to carry on the legacy of their fellow performer, educator and would-be director of a program with the organization. Widner passed away in the spring, and was not able to join the organization for its summer programming as planned. The organization is seeking to raise $2,000 to launch its memorial fundraiser.

Widner had plans to return to the Niles-based nonprofit to become a director of PAW Selects. The program is an advanced theatre workshop PAW hosts auditions for young, theater artists.

The leaders of PAW have worked with performance and artist professionals from across the country. Widner was not a Michigan native, but hailed from the east coast.

“I met Lauren [Widner] in 2017 when I did an internship in Connecticut at Goodspeed Musicals,” said PAW Executive Director August Garritano. “That’s how she came into our lives. She worked for PAW 2019 for two different workshops.”

Widner worked with both PAW Selects and Paw Jr., which is an arts camp for grades three through six.

“She was going to return this summer, but that wasn’t able to happen,” Garritano said.

For the team at PAW, putting together a merit-based scholarship is something new. According to the directors, it is a special occasion for a special person.

Garritano said that although Widner worked on the east coast in professional theater, she still wanted to come to Niles and work with PAW.

“She was a  person who didn’t  have a connection to the area,” said PAW Executive Director Lena Miles-LoRusso. “Lauren was willing to come from New Jersey, while she worked in professional theatre, and wanted to come back. It was really special, and very sad that it couldn’t happen.”

Though  Widner was not hired for her piano skills, she had ended up hopping into a role at the last minute in 2019 outside of her teaching role.

During a show in 2019, she stepped in as an accompanist for a production. PAW Associate Director Carly Tyran remembered feeling completely at ease when Widner sat down at the piano.

“She was comfortable. She was confident,” Tyran said. “She played all the way through the show with no mistakes. I felt so supported to have her by my side as the accompanist.”

Miles-LoRusso said it was not the only time during that workshop Widner stepped up and went above and beyond her original role with the organization.

“She did that in smaller ways throughout the week she was with us,” Miles-LoRusso said. “She jumped into whatever role needed to be filled at any given moment.”

The Lauren Widner Memorial Scholarship Fund has been established and is accepting donations. Further information on the scholarship and how to donate may be found on the PAW website.

BERTRAND TOWNSHIP — Ten deceased animals were found on a Bertrand Township man’s property on Monday. According to the Berrien... read more