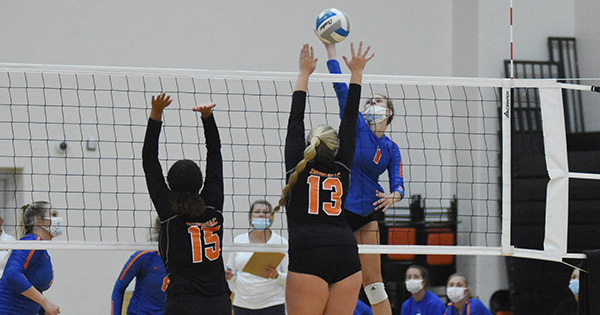 DOWAGIAC — When you are the defending Wolverine Conference champion, you have a target on your back every night.

Edwardsburg Coach Nikki Bush said her team needs to show up with more energy each night if it expects to defend its league championship. The Eddies also need to be more consistent. 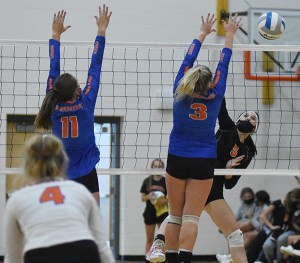 “Very low energy tonight,” Bush said. “We’ve struggled with that a lot so far. It definitely has been a frustration and a concern.”

Dowagiac coach Tony Hooley was not happy about coming up short against Edwardsburg, but was proud of the way his team played against the Eddies.

“I’m very proud of my team,” he said. “They hung tough and battled a great team for three sets, winning one of them. I’m not ready to celebrate a loss, but I am encouraged with the direction we are going.”

The Eddies, who were coming off a five-set win against co-champion Vicksburg last Thursday night, looked solid in the opening set. Edwardsburg led early in the second set before the Chieftains got their feet under them and showed how much they have improved since their season opener.

Edwardsburg (3-0, 2-0 Wolverine) struggled again in the third set, but overcame Dowagiac to take control of the match.

“We’ve definitely been consistently inconsistent,” Bush said. “That’s what we saw in game two today. We are working on not being complacent with a win but pushing hard to secure the second. It’s definitely a mental game.”

Dowagiac came into the match 2-0 in conference play. It had been solid in its serve receive and passing game, but that was not the case against the Eddies.

“Our passing wasn’t as sharp tonight, but our floor defense was outstanding,” Hooley said. “Allie Conner continues to anchor an improving backline, with everyone scrapping and fighting to keep the ball off the hardwood. We definitely lost steam in that final set, so we will continue to work on our conditioning.”

Edwardsburg was led at the net by Macy Laubach, Sophie Overmyer and Paige Miller. They combined for 35 kills. Jersey Bays led the team with 25 digs, while Overmyer added 16 and Delaney Borkowski 12.

“We are trying to really work on our team competition,” Bush said. “When it comes to our games, who is the leader in blocking for the match and serve receive. That type of deal to spark some competition amongst ourselves.”

Megan Davis and Riley Stack both played well, according to Hooley. The pair combined for 11 kills and two blocks. Caleigh Wimberley led the Chieftains with 21 digs, while Conner added 18 and Davis 14.

“Megan Davis and Riley Stack had solid performances offensively, with five and six kills respectively, and we are starting to see a little life from our middles, having produced six combined kills in the match,” he said.