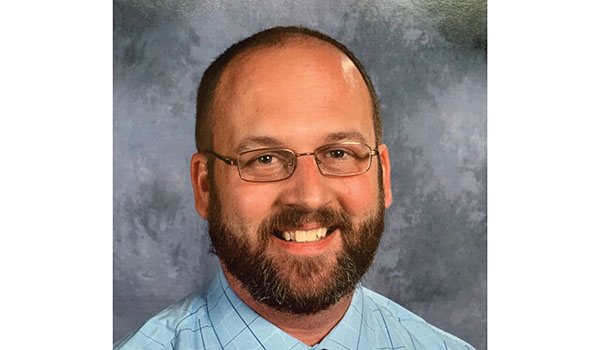 DOWAGIAC — Sister Lakes is getting a new principal who is no stranger to the Dowagiac community.
Ryan Zietlow was unanimously approved to be the new assistant principal/building administrator for Sister Lakes Elementary School by the Dowagiac Board of Education during Monday’s meeting at Dowagiac Middle School.

A third-grade teacher at Patrick Hamilton Elementary the past three years, Zietlow will fulfill many of the duties left by former Sister Lakes Principal Michael Campbell, who resigned in August.

“I have high hopes and high expectations,” said DUS superintendent Johnathan Whan. “He has many experiences that will suit him well. He’s a strong instructional teacher and leader, but he’s also gifted in technology. He’s a quality educator, and he’s a quality man. He’s a Chieftain through and through. We’re really excited about it.”

Zietlow is amid his second stint with DUS. After working as a seventh and eighth-grade teacher in the district for two years starting in 2010, Zietlow and his wife, Sarah, moved to Japan and taught in Japan for five years before taking a third-grade teaching position at Patrick Hamilton in 2017.

According to Zietlow, former Patrick Hamilton principal Heather Nash encouraged him to pursue school administration. Nash passed away in 2018 after complications during a routine knee surgery after 11 years as principal.

“One of the things we discussed when I came into the position was the idea of eventually becoming a school administrator,” Zietlow said. “She was a driving force behind me becoming an administrator. Her passing made me want to continue on with it. It’s one of those things that was always near and dear to me. I’m super excited to jump in with both feet. I’m thankful for the opportunity that Dowagiac has given me to do that. ”

With his technological experience, Zietlow has played an integral role in the implementation of the district’s distance learning plan.

“I met with [deputy superintendent Dawn Conner] over the summer about what we’re going to do with the distance learning plan,” Zietlow said. “My background is in educational technology, so I helped decide and work on ideas for what we would be doing for the distance learning plan. The district let me take the role of training Patrick Hamilton’s kindergarten through fifth grade team on Schoology, the platform the district decided to use. I dropped myself in and did a quick crash course in order to get the teachers the support they need to be successful.”

Zietlow will transition into his new role over the course of the next few weeks. The board approved the hiring of Kelsey Parmley for third grade teacher at Patrick Hamilton to fill the position Zietlow is leaving behind.

Zietlow appreciates the relationships he has built during his time with Dowagiac and looks forward to building many more.

“It’s been great,” he said. “I felt full trust from the district to go in and do the best we can to get what we need for the kids right now. Soon, we’re going to be face-to-face learning, and I hope we’re ready for that when the time comes. Right now, we’re trying to do as much as we can with distance learning.”