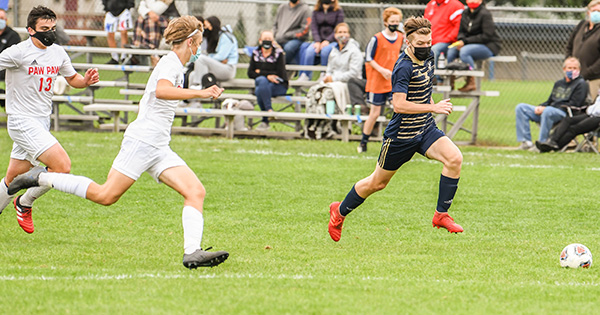 NILES — Dominic Thornton and Cade Vota have been a scoring juggernaut for the Niles soccer team this season.

The two combined for all seven goals in the Vikings 7-2 win over visiting Bridgman in a BCS Athletic Conference match on Saturday.

Vota had a hat trick in the opening half as Kyle Bruckner, Devon Bridges and Thornton assisted on his goals.

Thornton did him one better in the final 40 minutes as he scored four times. Assisting on the goals were Vota, Brucker, Daniel Becraft and Caleb Thornton.

“We came out a little slow, then we settled down and started playing to our abilities,” said Niles coach Abel Fonseca. “We moved the ball around with composure. We played hard all around, with defense making some good stops along with Antwon Whitelow getting eight saves in the game.”

The Vikings were back on the pitch Monday night as they traveled to Kalamazoo to take on former SMAC foe Loy Norrix. Niles will travel to Cassopolis for a non-conference match on Thursday.

The Eddies dropped their four consecutive match as they fell to visiting Lakeshore 1-0 in a non-conference contest.

Edwardsburg (1-4) had been shut out in three straight matches.

The Eddies traveled to Dowagiac for a Wolverine Conference match Monday night.

NILES — Visiting Niles had a good day at the Battle Creek Lakeview Quad on Saturday. The Vikings went 2-1... read more