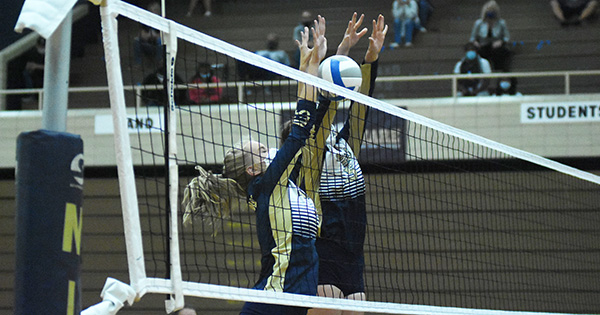 NILES — Visiting Niles had a good day at the Battle Creek Lakeview Quad on Saturday.

The Vikings went 2-1 as they defeated Edwardsburg and Sturgis before losing to host Battle Creek Lakeview in three sets.

“This team is so much fun to coach,” said Niles coach Jenny Nate. “I love their energy, and they are outstanding, supportive teammates to each other. They just keep getting better as a unit and keep building chemistry and confidence each week. We had more balanced scoring today from our hitters, which really helped seal the tighter sets most of the day, and our setters did a nice job making good offensive choices.”

Nate was also happy that things the team worked on in practice carried over to the matches.

“We have also worked a lot on aggressive serving this season and had more aces and points from the serving line today, which added to our game. We still missed a few here and there, but we will continue to work hard in that area,” she said. “Our serve receive was strong, and our defense had some great saves today and did an excellent job reading the hitters.”

Nate said her team lost energy and momentum against Lakeview after winning the first set.

“We have to continue to work on controlling runs,” she said. “We were up big in quite a few sets and controlled the tempo of many of the games, but we have to make sure we don’t let teams back in when we have a large lead. I was extremely proud of our ability to finish some intense, close sets to capture those wins, but now, we also have to work on having the stamina and aggressive focus and mindset to finish the day with all wins.”

Niles will host Bridgman in a BCS Athletic Conference match at 6 p.m. on Wednesday.

VICKSBURG — The Bucks defeated Otsego, Lakeshore and the host Bulldogs to win the Vicksburg Quad on Saturday.

Josie West led the team with 18 kills and 16 digs, while Faith Carson finished with 16 kills and 10 blocks. Katie Schau had 11 kills and four blocks.

Claire Shelton had 63 assists and three blocks for the Bucks, who travel to Comstock for a BCS Athletic Conference match on Tuesday.

Here is the composite sports schedule for Sept. 22-26. The schedule is subject to change without notice.   Tuesday, Sept.... read more