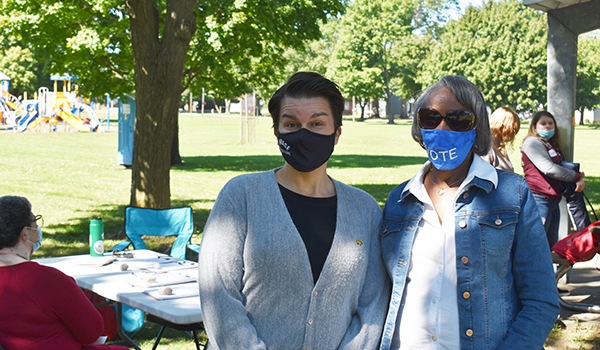 NILES —  A table with hot dog toppings and chips sat welcoming curious visitors to an event in East Side Park on Saturday. Music over loud-speakers signaled an event, and a person stood at the corner with a sign directing passersby to the park for election information.

Off to the side, in the shade of a tree, was a table with volunteers and paperwork for the upcoming election. This was not a campaign event, but instead, an event to educate and register voters in their neighborhood parks.

Beverly Woodson, co-founder of HOPE, Helping Our People Evolve, was out at East Side Park, at the corner of N. 17th and Sycamore streets, sporting a face mask that said “Vote” across the front. HOPE is a nonprofit organization local to Niles that focuses on community engagement in education, spirituality and civic affairs, according to its Facebook page.

“I always tell people if you don’t vote, you’re voting the same person back into office,” Woodson said. “You have a choice. Your vote does count. This is why we came up with this [event].”

The event was hosted from 11 a.m. to 4 p.m. Saturday, and was the first one of a handful the group has plans for.

Woodson hopes through the events the volunteers with HOPE can educate attendees on how to vote, where to vote, how to register to vote and how voting works securely in Michigan. She said she hopes to dispel myths about the safety of voting by mail.

“We try to eliminate a lot of misnomers,” Woodson said. “We try to move that out of the way so that they know the information to vote, whether it through the mail or directly at the place.”

By 2 p.m., the group had registered four voters in time for the Nov. 3 election.

One of the voters registered had been meaning to do it but had put it off, according to Niles city council member and HOPE volunteer Jessica Nelson.

“It’s awesome that people are walking by in their own neighborhoods and stopping,” she said.

About 15 people were in attendance, both volunteering and spending time with the volunteers by the time the event hit its halfway mark.

Members of the Niles city council and the school board of Niles Community Schools attended throughout the afternoon, to speak with voters and the volunteers organizing the event.

Woodson said there will be more events in the future to host a cookout atmosphere and educate voters where they live. The group’s goal is to host one in each of four voting precincts in Niles city proper. The events will be posted to the HOPE — Helping Our People Evolve Facebook page.