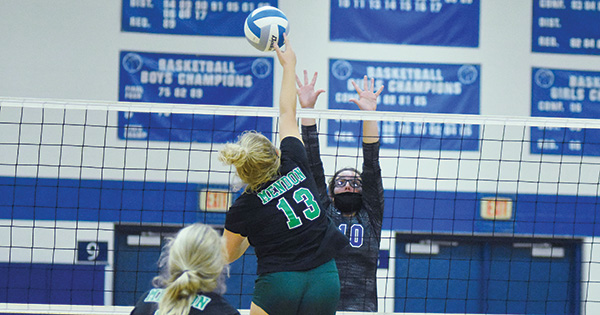 DOWAGIAC — The Dowagiac volleyball team remained undefeated in the Wolverine Conference with a 3-0 win over host Paw Paw last Thursday.

“It was a nice road win for us,” he said. “Several solid performances tonight. It all starts in the back row, and they are playing defense and passing so well. I couldn’t be more pleased how well this group has improved over the last few years. In my 23 years of coaching, I can’t remember a team of mine not committing a single reception error.”

Leading the way defensively for the Chieftains was senior Allie Conner with 17 digs. Dowagiac also got 11 digs from Caleigh Wimberley and six digs each from Megan Davis and Jessie Hulett.

Serving was another key element to the Chieftain victory.

“Our serving game was on tonight,” Hooley said. “After three or four service errors in the first set, we only ended up with five at the end of the match. It was the second straight outing where we served 93 percent as a team.”

Davis and Wimberley led Dowagiac with six kills on the night.

The Rangers played well in the opening set against the defending state champion Hornets, but Mendon pulled away to a sweep last Thursday.

NILES — Dominic Thornton and Cade Vota have been a scoring juggernaut for the Niles soccer team this season. The... read more