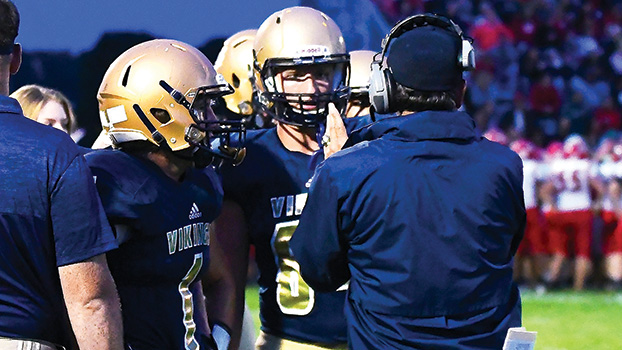 Niles coach Joe Sassano (back to camera) said his team need to eliminate giving up the big play on defense. (Leader file photo)

NEW BUFFALO — There were a pair of debuts at New Buffalo High School Friday night.

Niles made its one-year debut in the BCS Athletic Conference, while veteran football coach Elliot Uzelac made his debut as the coach for the Berrien Springs Shamrocks.

The game was played at New Buffalo due to the fact that Berrien Springs’ new football facility has not cleared inspection for games to be played there.

Uzelac got the better of the debuts as the Shamrocks defeated the Vikings 21-8 to open the 2020 football season, which has been shortened to a six-game regular season.

The Vikings lone score game in the second quarter when Jason Matlock scored on a 1-yard run and then added the two-point conversion run.

“We learned that we have to eliminate the big play on defense,” he said. “On offense, we need to execute better blocking and continue to learn our assignments. Overall, we need to get a better effort from all 11 on every play, all game long.”

Despite giving up some big plays, Sassano said there were some positives.

“I really liked how our defense flew to the ball and played hard,” he said. On offense, we ran the ball hard and had no turnovers.”

He also was pleased with one area of the game in particular.

“If I was surprised about anything, it would be that we didn’t have that many penalties given the fact that we only had nine days to prepare,” Sassano said.

The Vikings open up the home portion of their schedule Friday night when they host other BCS newcomer South Haven.

WYOMING — Senior Gabe Gouin threw for a pair of touchdowns and ran for another as visiting Brandywine rolled to... read more