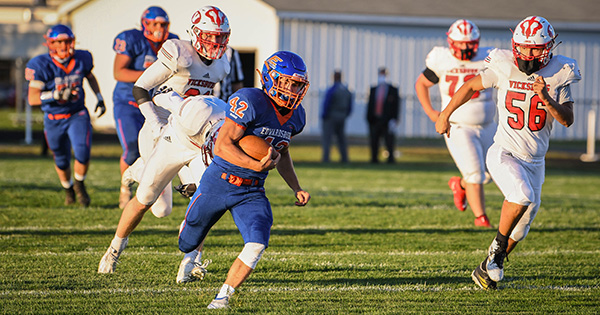 EDWARDSBURG — After an offseason that featured many twists and turns due to COVID-19, high school football returned to Michigan Friday night, much to the delight of the Edwardsburg football team.

The Eddies scored the game’s first 42 points in a 58-7 season-opening home win over Vicksburg.

“It’s good to get back on the football field, you know?” said Edwardsburg coach Kevin Bartz. “Obviously, both teams were a little sloppy. It kind of looked at times like we hadn’t played much football, but we came out aggressive both offensively and defensively in the first half and kind of controlled things. I’m pleased with what we did but we have a lot of work to do, yet.”

Leading 6-0 entering the second quarter, the Edwardsburg run game opened up. Logan McColley, Jeremy Walker, Jackson Hoover and Drew Bidwell scored on runs of 3,12,43 and 1 yard, respectively to put the Eddies up 34-0 at halftime.

The Edwardsburg offense finished with a 472-51 edge over Vicksburg in total rushing yards. Seven running backs found their way into the end zone for the Eddies, led by sophomore Brett Allen’s five carries for 150 yards and one touchdown and Hoover’s eight carries for 118 yards and one touchdown. Allen also led the defense in total tackles, with five.

“[Our running backs] had some great blocking,” Bartz said. “They should have done all right. Once they found a seam, we’ve got some kids that are pretty quick, including Allen, who comes in as a sophomore and fills a nice void for us. I thought we ran the ball hard, but I thought the line did some nice blocking that gave us some good seams.”

The Bulldogs were held to 115 yards of total offense. Edwardsburg senior lineman and team captain Tanner Hursh tallied a sack on defense and provided solid blocking on offense.

“It was great to be back on the field,” Hursh said. “We put in a lot of hard work this week. Every game is limited with the coronavirus going around. We play every game like it is our last and leave everything out on the field.

According to Bartz, Edwardsburg entered Friday, expecting to play at Detroit Country Day next week. That is no longer the case. The Yellow Jackets, last season’s Division 4 runner-up, canceled its away game against Macomb L’Anse Creuse North Friday due to a positive COVID-19 test within the program, and have canceled their game against the Eddies.

According to Edwardsburg’s football schedule on MHSAA, the game against Country Day has been replaced with a 2 p.m. Sept. 26 game at Brazil Northview (IN).

“It changed four times in the last three days,” Bartz said. “We’re scheduled to go over to Detroit Country Day, and [Country Day coach Dan MacLean] called me last night at 7 p.m. said we’re on, and then he called me this morning and said we’re off. They’re out of school and not playing, so we don’t know where we’ll be ready for whoever it is.”

The Eddies may have to prepare without one of their team captains in lineman Bennett Meyers, who left the game in the second quarter with a knee injury.

“Meyers is huge for us,” Bartz said. “He’s our best offensive and defensive lineman. He’s gonna go in for a quick X-ray and get an MRI after that, but he’s one we have to get back. He’s kind of our heart and soul on both lines. He’s big for us.”

WYOMING — Senior Gabe Gouin threw for a pair of touchdowns and ran for another as visiting Brandywine rolled to... read more